Singapore: Bayern Munich coach Carlo Ancelotti believes new loan signing James Rodriguez will play a key role in the engine room of the German champions as they seek to export their domestic dominance to the rest of Europe.

Ancelotti guided Bayern to a fifth Bundesliga title in a row last season but the side suffered a fourth successive knockout stage failure in the Champions League and the Italian is hoping midfielder Rodriguez will spur them to greater success.

"James has a fantastic quality that can improve our level of play," Ancelotti told reporters in Singapore on Monday, where the club are involved in a three-team pre-season tournament. 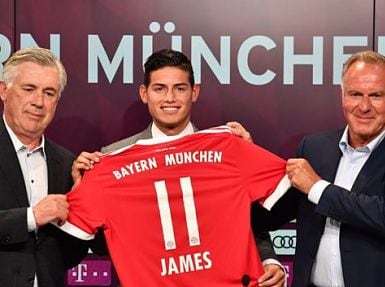 "I think he gives us something extra between the lines (attack and midfield), especially in terms of the final pass to the strikers," Ancelotti added of the Colombian, who joined Bayern on a two-year loan deal from Real Madrid.

"I joined Bayern because they are one of the best teams in the world and I am delighted to be at a club where the coach really trusts me," added the 26-year-old, who endured three frustrating seasons in the Spanish capital.

"I am here to win titles and am sure that we have the team and the coach to do it."

Ancelotti was also quick to dismiss media reports linking Chilean enforcer Arturo Vidal with a move away from Munich, the coach insisting the player was going nowhere.

"There is no way Vidal is leaving," he added. "He is our player and will remain so. I know there are rumours but that is normal for this period but Vidal will stay with us 100 percent."

Bayern suffered a humiliating 4-0 loss to AC Milan in a Shenzhen friendly on Saturday. Ancelotti is hoping his side put on an improved display against English champions Chelsea in their International Champions Cup Singapore opener on Tuesday.

"It is okay to make mistakes during this period as it is the pre-season. We use it to prepare well for the season, to improve the things that we need to improve," he said.

"Of course, no one wants to lose 4-0 so we hope for a better performance tomorrow. We are hoping for a good test and are focused on a number of things - good play, defence, balance and attack," Ancelotti added.

"But I don't feel pressure. If I felt pressure now, I would be dead by the time the season started."

Looking ahead to the upcoming Bundesliga season, Ancelotti expects Bayern's main threat to come from Borussia Dortmund and last season's surprise runners-up RB Leipzig, who he believes may struggle with a heavier workload.

"I expect the same teams to challenge us next season. Of course, Dortmund will be there and it will be interesting to see how Leipzig go now that they have Champions League involvement and they are not used to playing in this competition, combining domestic and European football."

Inter Milan are the third team involved in the Singapore tournament.