Berlin: Borussia Dortmund twice hit the woodwork but couldn't find a winner on Friday as they were forced to share the points with Hanover 96 in the first goalless Bundesliga draw of the season.

After an opening 25 minutes largely contested in midfield, Maximilian Philipp had the ball in the net, only for it to be correctly ruled out after Marius Wolf was spotted offside. 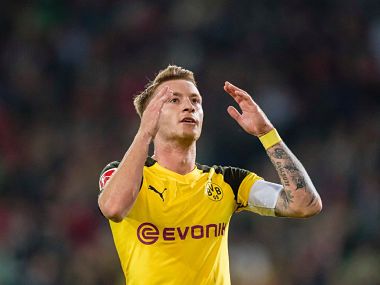 Towards the end of an even first half, Dortmund burst into life.

Marco Reus saw an effort headed for the far corner pushed wide by Hanover goalkeeper Michael Esser's outstretched toe, and less than a minute later, Reus rattled the bar after a superb pass by Mahmoud Dahoud.

"I had to score one of them," Marco Reus told Eurosport afterwards. "I can only apologise to my teammates."

Although Hanover's only attack of note ended with teenage winger Linton Maina's shot being blocked, the home side had been strong defensively.

In the second half, more of the same followed as Dortmund were kept at bay by a disciplined and well positioned Hanover side.

Maximilian Philipp nearly found an opening when he sent a header goalwards, but the forward was left disappointed when his header clipped the post and hurt after clashing heads with Hanover captain Waldemar Anton in the process.

Anton nearly turned hero at the other end as well, having been found in the box from a corner, but he flashed his effort narrowly wide.

American striker Bobby Wood, making his Bundesliga debut for Hanover, stumbled before he could get his shot away.

For Dortmund, the result was in stark contrast to the storming 4-1 win over RB Leipzig on the opening weekend and Lucien Favre's side will be hoping to fare better when they host Eintracht Frankfurt after the international break.