Berlin: Bayern Munich surrendered a two-goal lead in a 2-2 draw at Hertha Berlin on Sunday in their first match since Carlo Ancelotti's shock sacking, slipping to five points behind leaders Borussia Dortmund.

With Willy Sagnol in temporary charge after Ancelotti's dismissal on Thursday, Bayern went 2-0 up at Berlin's Olympic Stadium with goals from Mats Hummels and Robert Lewandowski.

But Berlin roared back with two goals inside five minutes from Ondrej Duda and Salomon Kalou to share the spoils.

"That's a bit annoying for us," said Sagnol, whose team nonetheless moved up to second. 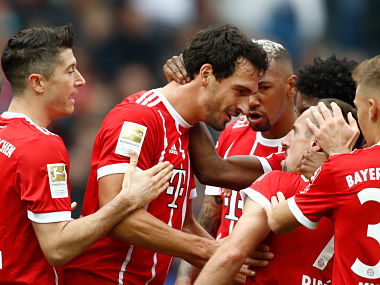 "We have to play with more concentration and discipline.

"When we don't concentrate, then we aren't the strongest team in Germany any more," admitted the Frenchman.

Bayern threw away a two-goal lead for the second league game in a row after being held 2-2 at home to Wolfsburg ten days ago.

Ancelotti was dismissed after 15 months in the wake of Bayern's 3-0 drubbing at Paris Saint-Germain in the Champions League.

Hoffenheim's 30-year-old boss Julian Nagelsmann and ex-Dortmund coach Thomas Tuchel are amongst the favourites to take over permanently.

The quartet had all criticised the club in recent weeks, playing a role in undermining Ancelotti's authority.

Bayern made a bright start when Hummels headed Munich ahead on 10 minutes.

The game burst into life early in the second-half as Lewandowski fired home on 49 minutes after robbing Hertha defender Niklas Stark.

However, Berlin responded with two goals in five minutes.

With Bayern in disarray, Kalou scored from eight yards out to equalise on 56 minutes.

RB Leipzig went fourth, just a point behind Bayern, on Sunday night with a 2-1 win at bottom side Cologne thanks to goals by Lukas Klostermann and Yussuf Poulsen.

Japan striker Yuyu Osako scored a late consolation goal for Cologne, who have one point from their first seven games.

Veteran Peru striker Claudio Pizarro, 38, the Bundesliga's all-time top-scoring foreign player with 191 goals, made his debut for Cologne after signing on Friday.

Hoffenheim crashed to their first Bundesliga defeat of the season with a shock 3-2 loss at strugglers Freiburg.

Hoffenheim dropped to third, but level with Bayern on 14 points.

Dortmund ground out a 2-1 win at Augsburg on Saturday, even though star striker Pierre-Emerick Aubameyang squandered a second-half penalty.

In Freiburg, the game against Hoffenheim got off to a bang with all three goals coming in four crazy minutes.

The hosts took the lead on 18 minutes when Turkey international defender Caglar Soyuncu headed home from a corner.

The match finished with two goals in the dying stages as Freiburg sealed their first win of the season when Pascal Stenzel scored on 87 minutes.

Freiburg midfielder Julian Schuster turned the ball into his own net two minutes into added-on time but the hosts held on.

The win lifted Freiburg out of the relegation zone, at the expense of Hamburg, who were held to a goalless draw at home by Werder Bremen on Saturday, leaving both teams in the relegation places.