Brisbane: Kei Nishikori showed he was back to his best form as he downed Bulgaria's Grigor Dimitrov 7-5, 7-5 to reach the semi-finals of the Brisbane International on Thursday. 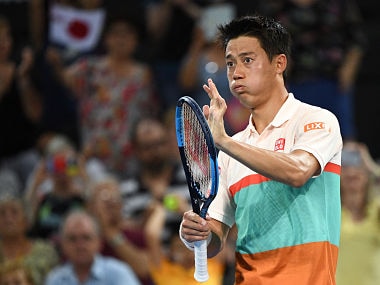 Nishikori proved too consistent for the Bulgarian in a high-quality match, securing crucial breaks at 5-5 in both sets.

Afterwards, the 29-year-old said his goal was to get back into the top five after seeing his ranking plummet to 39 in April last year due to persistent injuries.

"The last couple of months of last year I was playing great tennis and I think I'm doing that now, this week."

The match was a replay of the 2017 final, won by Dimitrov in three sets.

But Nishikori turned the tables this year by returning the Bulgarian's serve superbly throughout, putting Dimitrov under pressure at key moments and showing fight to come back from 1-4 down in the second set.

"I was expecting to go to a third set – he started playing better and I was down 4-1," Nishikori said.

"But I think the last couple of games I played very solid and I'm very happy."

He will now play Frenchman Jeremy Chardy for a place in Sunday's final and will go into the match as a firm favourite following Chardy's three-set struggle over qualifier Yasutaka Uchiyama.

Uchiyama, 26, had only won one match on the main ATP Tour before this week and pulled off a massive upset when he beat third seed Kyle Edmund in the second round.

Chardy was not as sharp as he was during his win over Nick Kyrgios on Wednesday and was forced to battle for over two hours before beating Uchiyama 6-4, 3-6, 7-6 (7/4).

The Frenchman underwent knee surgery in April 2018 and missed seven months of tennis, slipping to a world ranking of 239 at the year's end.

He was due to face Nadal in the second round but when the Spaniard withdrew with a thigh strain, Daniel came in as a replacement.

Tsonga saw off the Japanese challenge to win 7-6 (7/5), 6-3 and record his first back-to-back victories since last February.

"It was, of course, one of my goals to be able to play two matches in a row," he said.

"Now the new goal is going to be to win three matches in a row and be able to stay healthy.

"That's the most important for me. Of course, I'm really happy for the win, but also really happy to be able to play the next match, too."

He will play rising Australian star Alex de Minaur in the quarter-finals.