Sao Paulo: Corinthians boss Tite was named as the new coach of Brazil on Wednesday, succeeding Dunga, who was sacked after the team's humiliating exit from the Copa America, his club revealed.

But the task of turning around a lackluster Brazil in time for the Rio de Janeiro Olympics in August will fall to current under-20s coach Micale, said the Brazilian Football Confederation (CBF). 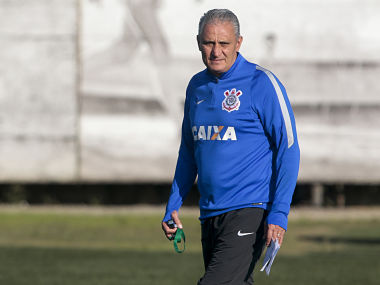 Brazil is battling to find its form in time to host the Olympics, where it has never won gold, and to save its qualifying campaign for the 2018 World Cup.

But Dunga, the man appointed to turn things around after the embarrassment of the team's 7-1 World Cup semi-final thrashing by Germany on home soil in 2014, failed to deliver results fast enough.

Tite -- whose real name is Adenor Leonardo Bacchi -- had been widely touted as his successor after the CBF sacked Dunga and his entire staff on Tuesday, and Corinthians president Roberto de Andrade confirmed the move.

"Tite no longer works at Corinthians. He accepted the CBF's invitation," he said.

The Brazilian Football Confederation has not confirmed the appointment, but officials there met with Tite on Tuesday.

Tite, 55, has coached a string of top clubs in Brazil, including Gremio, Atletico Mineiro and Palmeiras, as well as Al Ain and Al Wahda in the United Arab Emirates.

He has spent three trophy-studded stints at Corinthians, leading the Sao Paulo club to two Brazilian league titles, in 2011 and 2015, and the Copa Sudamericana in 2013.

In 2012, he coached them to a double championship of the regional Copa Libertadores and Club World Cup.

The national team's string of humiliating losses is just one more blow to Brazil's morale as the country struggles through a deep recession, political turmoil and a huge corruption scandal.

Tite is known as a coach with a talent for turning things around.

But he faces an uphill battle to return Brazil to its glory days, said influential sports columnist Juca Kfouri.

"He has a recent winning streak and plans to bring Brazilian football back to its roots. But he belongs to the school of results-oriented football. So he should be more efficient than Dunga," Kfouri told AFP.

But "Brazilian football's problems can't be solved by changing coaches," he added.

That, he said, can only be done by addressing the "structural" problem of corruption in football and "breaking with the style of power of the Teixeiras, Marins and Del Neros."

The reference is to the CBF's past two presidents, Ricardo Teixeira and Jose Maria Marin, and current boss Marco Polo del Nero, all of whom have been indicted by the United States in its sweeping investigation of corruption in world football.

Tite got his nickname as a talented young player from Luiz Felipe Scolari, Dunga's predecessor, who reportedly garbled his name when he introduced him to the directors of a local football club.

He hung up his boots at the relatively young age of 28 due to knee injuries and turned to coaching, leading Gremio to win the Brazilian Cup in 2001.

Corinthians fans credit him with nothing short of a renaissance.

"Thanks to you, my children watched Corinthians win more titles in two years than I saw in 20 and my father in 40. Thank you Tite!" one fan wrote on Twitter.

The new coach inherits the team in the middle of a troubled World Cup qualifying campaign.

They are currently in sixth place in their regional group, which would be too low to qualify.

Brazil prides itself on being the only team to have played in every World Cup, and leads the all-time winners' list with five titles.

Meanwhile, Olympic team coach Micale will be in the spotlight when the Rio Games kick off on August 5 and Brazil goes for its first football gold.

Chief on the player list should be Barcelona striker Neymar, who was absent from the Copa America after his club side made that a pre-condition of releasing him for the Olympics.