Freddie Roach denied media reports published on Friday that he had ordered armed guards to protect Manny Pacquiao at his Hollywood gym.

The UK's Daily Mail newspaper reported that Roach had personally ordered security guards at his Wildcard gym in Los Angeles to carry guns "so people respect them" as Pacquiao trains in the build-up to his May 2 megafight with Floyd Mayweather in Las Vegas. 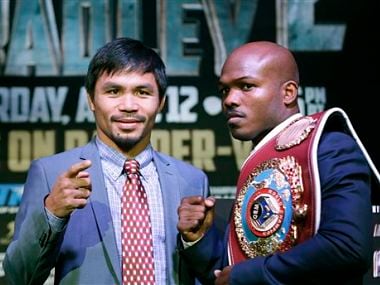 But Roach, in Macau to supervise the corner of China's Zou Shiming as he challenges for the IBF flyweight world title against Amnat Ruenroeng of Thailand on Saturday, told AFP: "Yeah I heard something about that. It's not true.

"We have our normal security. To say they are armed and and are patrolling outside the gym is bullshit."

Roach's gym, where he has trained 34 world champions in an illustrious career that has seen him inducted into boxing's Hall of Fame, is renowned for being open to all so fans can catch glimpses of their favourite fighters.

But Roach said that the doors will be closed to media and fans during most of Pacquiao's training sessions, so his opponents don't get any clues to their preparations.

"Yes we will work with Manny in private to prepare for Floyd -- that's normal. But to say I've ordered armed security is absolute bullshit," Roach said.

Philippines eight-weight world champions and undefeated welterweight Floyd Mayweather will finally go glove-to-glove in May to decide who is the best fighter of their generation in a contest expected to break all records and generate in the region of $300 million dollars.