Bengaluru: India's most decorated woman boxer MC Mary Kom, on Saturday, rued that the sport is as good as "dead in India" because there has been no competition happening with national association in a limbo.

"Boxing in India is almost dead. There are no major competitions held for the past two years in India. I miss tears welling up in my eyes when I see the Indian flag going up after I had won a medal in an international event," Mary Kom said at inauguration of Ultimate Boxing Championship organised by Phoenix Market City in Bengaluru. 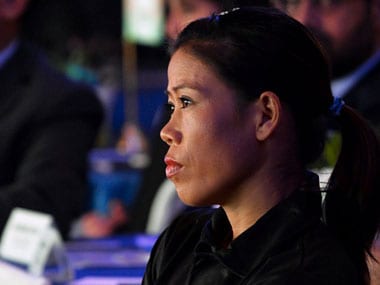 "I hope this event will give a big boost for fighters and for upcoming youngsters," she said.

Mary Kom again made it clear that retirement is not on her mind as she wants to continue for another three years.

"It was unfortunate not to get the wild card, but would continue to play for next three years," she told reporters ahead of the Ultimate Championship organised by Phoneix Market City here.

On a separate note, the London Olympics bronze medallist also congratulated athlete Dutee Chand for qualifying in the women's 100 metres dash at the Rio Olympics.

"I congratulate Dutee on her qualication for Rio Olympics. It is a great honour to represent country at the Olympics. Its a matter of great pride as she became first woman in 36 years after PT Usha to qualify for 100m dash", Mary Kom said.

Mary Kom felt that Dutee's achievement is more praiseworthy as qualifying in a major athletics event is tougher than winning medals in boxing.

"To qualify and winning in boxing at the Olympics is a bit easy compared to Athletics. Therefore, to qualify in 100m is a great achievement. I will always pray for her success," she added.