Check out LIVE updates from the Bundesliga fixture between Bayern Munich and Borussia Dortmund on the Firstpost.com Live Blog.

And that's it for tonight! Bayern Munich are in prime position to win their eighth consecutive title, seeing as they are now seven points ahead of second-placed Borussia Dortmund. Teams have slipped up before, and yes, there's a chance that Dortmund could bridge that gap in the eight games that remain, but it's unlikely, to say the least.

Dortmund are behind, and in quite some trouble. Bayern were already playing some excellent football before scoring, but with a one-goal advantage, they look poised to take home the three points. Even though there's just one goal in it, Lucien Favre will need to give the team talk of his career if Dortmund have any hope of winning this now.

And we're underway! Dortmund should begin with more intensity, because in all honesty, this is a make or break game for Dortmund. There's already a four-point difference between them and the league leaders, and their title hopes can be considered to be all but over if they lose tonight.

Bayern Munich will be travelling to Borussia Dortmund on Tuesday to play Der Klassiker, the most celebrated derby in German football, and the world will still be watching. And why shouldn’t it?

Click here to read more of Srijandeep Das' preview of the match.

Hello and welcome to our coverage of 'der Klassiker!'

In today's mega-clash, Borussia Dortmund will have to beat Bayern Munich if anyone is to have a realistic chance of stopping the seven-time defending champions from claiming yet another Bundesliga title. Stay tuned for live updates, some colour commentary and more!

Thank you for tuning in to read our coverage of the Bundesliga! Until next time, goodbye, goodnight and stay safe!

And that's it for tonight! Bayern Munich are in prime position to win their eighth consecutive title, seeing as they are now seven points ahead of second-placed Borussia Dortmund. Teams have slipped up before, and yes, there's a chance that Dortmund could bridge that gap in the eight games that remain, but it's unlikely, to say the least.

This Robert Lewandowski's got a good left peg on him eh? The Polish striker picks up the ball, drives towards Dortmund's goal, and unleashes a ferocious curling shot that whacks the upright and leaves it shaking. That would have been some goal if it had gone in.

Mahmoud Dahoud is yet to score a goal in this match, but it's not from a lack of effort. The Dortmund midfielder has been popping off shot after shot from range, and so far, Neuer has been up to all of them.

Borussia Dortmund get a free-kick in a very good spot, but it's a little unjust, because Alphonso Davies actually made a very good tackle and won the ball. Guerreiro and Hakimi stand over the ball, and it's the Portuguese attacker who takes it. It's hit hard, but at the perfect height for Manuel Neuer to claim it.

The fire's gone out of Dortmund's play in the last 15 minutes or so, and the game has become a bit more sedentary than they would like. Bayern are controlling possession, and making it difficult for them to find space.

Surely that was a penalty for Borussia Dortmund? An Erling Haaland shot hits the arm of Bayern defender Jerome Boateng, but the referee does nothing. See, this is the gripe that football fans, players and coaches have with VAR. When it comes to a toenail being offside, VAR will take 10 minutes to disallow a goal, but when it's a legitimate shout for a penalty, there's nary a peep from the video referees.

Bayern are quite content to draw Dortmund in and then hit them on the counterattack, which is something you have the luxury of doing when you're a goal up. Dortmund have maintained a pretty high level of intensity since the start of the second half, but they need to be careful not to overcommit.

I mean, if you're looking to shake up the game with a substitution, there aren't many players better than Jadon Sancho that you could bring on. The English winger comes on in place of Julian Brandt before the game kicks off. Brandt has had a good enough game, but he's no Sancho. Also, Delaney is replaced by Emre Can. 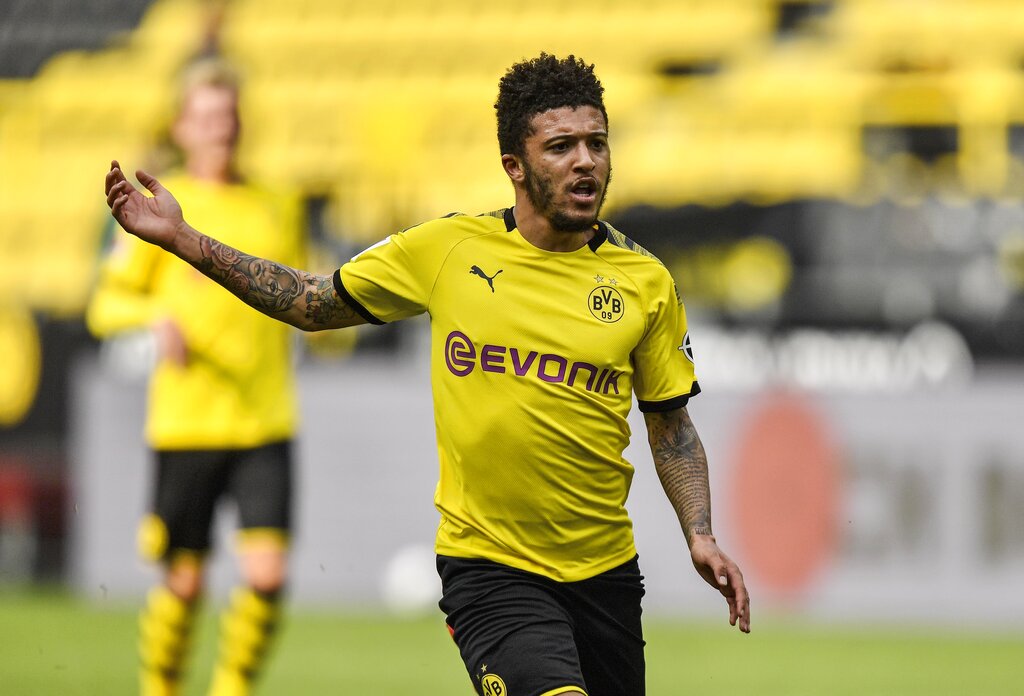 Dortmund are behind, and in quite some trouble. Bayern were already playing some excellent football before scoring, but with a one-goal advantage, they look poised to take home the three points. Even though there's just one goal in it, Lucien Favre will need to give the team talk of his career if Dortmund have any hope of winning this now.

Preview: Borussia Dortmund have to beat Bayern Munich on Tuesday if anyone is to have a realistic chance of stopping the seven-time defending champions from claiming yet another Bundesliga title. “This game will be decisive. If we lose, it’s more or less over,” Dortmund defender Raphaël Guerreiro said after his side’s 2-0 victory at Wolfsburg on Saturday. “At the same time, if we win, we can still dream of the title.”

Dortmund are four points behind Bayern with seven games of the season remaining — if they can be played. The league was suspended for two months due to the threat of the new coronavirus and only allowed to resume on 16 May under strict hygiene conditions.

If it needs to be called off again, final league places will likely be determined on current position, though the league’s measures against the virus appear to be working for now.

No supporters are allowed to attend any games for the rest of the season, ensuring Tuesday’s game — known in Germany as “der Klassiker” — in Dortmund’s 80,000-capacity Westfalenstadion will be the quietest ever Bundesliga clash between the old rivals.

However, Dortmund showed they can cope without the support of its “Yellow Wall” of almost 25,000 standing fans in its south terrace when they defeated Schalke 4-0 in the Ruhr derby on the league’s restart.

“It’s certainly different emotionally without spectators,” Dortmund sporting director Michael Zorc said. “It comes down to the values that we brought to the field in the last two games. The team was right on point.”

Both Bayern and Dortmund have been in record-breaking form with nine wins from 10 games since the season’s halfway stage. Bayern’s only slip was a scoreless draw with Leipzig on 9 February, while Dortmund dropped three points in a somewhat unlucky 4-3 defeat in Leverkusen the day before.

“We’re marching, Dortmund are marching, so we can look forward to Tuesday,” Bayern’s Thomas Müller said after scoring one and setting up another in his side’s 5-2 win over Eintracht Frankfurt on Saturday.

The 30-year-old Müller is arguably in the form of his life, reinvigorated with seven goals and 13 assists since Hansi Flick took over as coach from Niko Kovac in November.

With Bayern’s record 80 goals in 27 games and Dortmund’s 74, neither side had scored so many at this stage of the league before. Bayern went on to score 101 in 1972.

Bayern’s current team, which has looked impervious under Flick, could well eclipse that mark, while Dortmund’s attack has been reinvigorated by the arrival of Erling Haaland. The 19-year-old Norwegian has 10 goals in 10 Bundesliga appearances since his winter transfer from Salzburg.

“Haaland can be another (Robert) Lewandowski,” former Dortmund and Bayern coach Ottmar Hitzfeld told Kicker magazine, referring to Bayern’s Polish star who scored 12 goals in his last six games against Dortmund. Lewandowski has 16 goals altogether against his former club.

Dortmund lost 4-0 in Munich in the sides’ previous meeting in November, but Lucien Favre’s team has been reinforced in the meantime by the arrival of Haaland and Emre Can.

“We’re better,” the Dortmund coach said. “We’re playing with another system that’s better for our squad. And we signed two players in winter and have a whole other presence.”

Few Bundesliga teams are capable of pushing Bayern to its limits. Dortmund, the last team other than Bayern to win the title in 2012, has consistently come closest in recent years.

Müller is clearly relishing the challenge.

“We want to bring the title to Munich, there where it belongs,” the evergreen Bayern forward said.