New Delhi: The Board of Control for Cricket in India's (BCCI) tender process to award Indian Premier League (IPL) media rights has been thrown into jeopardy after the Supreme Court-appointed Lodha committee sought clarity from the former about the duration of the media 'Rights Period', making it amply clear that no independent auditor will be appointed before Tuesday.

In a late development, BCCI president Anurag Thakur replied to the panel's query, informing that the compliance report by him and secretary Ajay Shirke will be filed by 5 November and it's their "consistent endeavour of the BCCI office-bearers to ensure implementations of the recommendations by the committee".

The BCCI's global media rights tender, which comprises broadcast, mobile and internet rights, was supposed to be opened in Mumbai on Tuesday with 18 companies including social networking giants Facebook and Twitter also buying ITT documents. 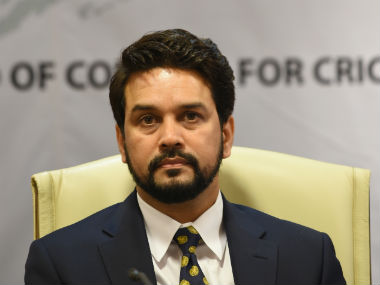 In the present scenario, BCCI will not have any options but to defer the tender process.

BCCI secretary Ajay Shirke had written a letter to the panel seeking directives as to whether an independent auditor, as directed by the Supreme Court, will be appointed before the bidding process begins.

In a letter to Shirke, panel secretary Gopal Shankarnarayan wrote: "Before the Committee proceeds to issue any directions, it would need to satisfy itself that the BCCI administration is willing to comply with the Order of the Hon'ble Supreme Court dated 21.10.2016.

"As you can understand, this would be necessary in view of the BCCI's stand concerning the earlier order of 18.7.2016. In this regard, the Committee requires a letter of compliance from the president BCCI duly undertaking on behalf of the BCCI to unreservedly comply with the Order of the Hon’ble Supreme Court dated 21.10.2016."

Shankarnarayan then asked for a few clarifications based on Shirke's letter.

"In your letter dated 21.10.2016, the first paragraph reads as follows: 1) The BCCI has already declared the process of a global tender for the IPL rights, where the previous Ten-year rights contract ended with the end of IPL season May 2016, as it was mandated to do so by the expiring contract."

The panel secretary then concluded by asking two specific questions.

Regarding implementation of the reforms, Thakur stated in his letter, "However for the benefit of the Committee it may be noted that president and secretary of BCCI had called a Special General Body Meeting of the BCCI on 30.09.2016 and 1.10.2016 for adoption of recommendation by the committee and adoption of Memorandum and Articles as proposed by the Committee.

"However the requisite percentage majority mandated under the Tamil Nadu Societies Act, 1975 of members present and voting could not be achieved for adoption of Memorandum and Articles as proposed by the Committee despite the secretary of the BCCI proposing the motion and president of BCCI seconding the motion. It may be noted that the BCCI president and secretary do not have vote or decision making power in such meetings."

"The BCCI office bearers have also assured the Hon'ble Supreme Court that they would take necessary steps in the meanwhile in order to establish their bona fides," Thakur further stated.