Two of the most spectacular feats of athletic brilliance at the 2020 Australian Open both involved Dominic Thiem.

The first was the point at 4-2 in the fourth set tiebreaker of his match against Rafael Nadal. Thiem tripped and fell to the ground after being wrong-footed by a Nadal crosscourt forehand, but somehow recovered, sprinted to the other side of the court, continued the rally, and won it when Nadal sent a backhand wide.

The second was the point at 4-3 in the fourth set tiebreaker against Alexander Zverev. Thiem had struggled with the timing on his forehand throughout the match, and when Zverev hit a deep return to that wing, we all felt the Austrian was in trouble. But Thiem lined up for his shot in double quick time and, despite looking totally out of position, absolutely unloaded on his forehand. He managed to generate a speed of 164 kmph while backing off, and Zverev could only flail his racquet in vain as the ball sped by for a clean winner.

Incredible speed and flexibility, monstrous power and muscle strength; over the past fortnight, Thiem showcased pretty much everything you would want in the perfect tennis player. And yet he still fell short at the final hurdle – just like he had at Roland Garros in 2018 and 2019. What’s going wrong for Thiem? There is, of course, the obvious factor that he’s been facing potential GOATs in these big matches. Before his match against Novak Djokovic, Thiem talked about how unbelievable it was that he kept running into the ‘kings of Grand Slams’ at their favorite hunting grounds; Nadal has never lost in 12 Roland Garros finals, and before Sunday Djokovic had never lost in 7 Australian Open finals.

Thiem has got the toughest possible opponent every time he has reached a Slam final, and he can hardly be crucified for coming out second best in them.

But there was also a mitigating circumstance in Sunday’s final: Djokovic was far from his best. In fact, for about a set and a half after 4-4 in the second set, the Serb was in an unmistakable swoon, looking like he wanted to get off the court as quickly as possible.

In other words, Djokovic was there for the taking.

To Thiem’s credit, he duly stayed the course and bludgeoned his way to a two-sets-to-one lead. For the first time ever, Djokovic was trailing in an Australian Open final, and all that the Austrian needed to do was land the knockout blow.

But he couldn’t. After squandering a breakpoint at the start of the fourth set, Thiem played a stinker of a service game at 3-4 to hand all the momentum back to the Serb. He then played another error-filled service game at 1-1 in the fifth set, and Djokovic didn’t need to be asked twice. The ‘king’ of Melbourne served it out from there, and even though Thiem did a good job of keeping the difference to just one break, he was left to rue what could have been. “There's nothing special to say about it,” Thiem said after the match. “It takes nothing more than just a little bit of luck, little details there. Maybe if I convert the breakpoint in the fourth set, maybe I'm sitting here as a winner.”

Can this be called a choke by Thiem? He was never in an outright winning position, but he did have a sizeable lead at the start of the fourth set. If he had taken that early breakpoint, or not missed the eminently makeable volley while serving at 3-4, 15-15, there really could have been a different result.

“Of course, I just feel a lot of emptiness right now. But that's it. I know the feeling. I did after the last two in Paris,” he said.

Worryingly for Thiem, there is plenty of precedent for his inability to take his chances against a top player – even aside from these emptiness-inducing finales. Just a few days ago, Thiem had spent the better part of four sets battering Nadal into submission, only to falter while serving for the match at 5-4. That game where he got broken was the very definition of a choke; he made a big double fault, overhit routine forehands by meters, and looked nothing like the player that had set Melbourne Park alight for the previous 3.5 hours.

Then in the tiebreaker, he choked again, smothering a sitter forehand into the net at 6-4 to get it back on serve. Thiem was lucky with the net chord at 6-6 and even luckier that Nadal missed a regulation forehand on the next point; his expression after winning the match was more of relief than jubilation.

If you go further back, there are more examples of Thiem freezing with the finish line in sight. Against Djokovic at Roland Garros last year, Thiem put in an utterly disastrous game while serving for the match at 5-4 in the fifth set; it took a similarly poor game from Djokovic immediately thereafter to hand Thiem the advantage again. And at the US Open in 2017 and 2018, he lost winnable matches to Juan Martin del Potro and Rafael Nadal respectively; the former in particular was as gut-wrenching as they come.

Thiem clearly has the physical tools to challenge and even defeat the very best in the world. The improvements he has made to his hardcourt game since 2018 are nothing short of extraordinary; he has gone from claycourt specialist to all-court threat in a matter of two years. But he still doesn’t seem to have the temperament to get over the last obstacle, and in the Big 3 era, that last obstacle is almost always going to be a GOAT candidate.

“Of course, it would be or it was easier for sure in a different era to win big titles,” Thiem said. “That's 100 per cent. But I'm happy I can compete with these guys on the best level. I really hope also that I win my maiden Slam when they're still around because it just counts more.” 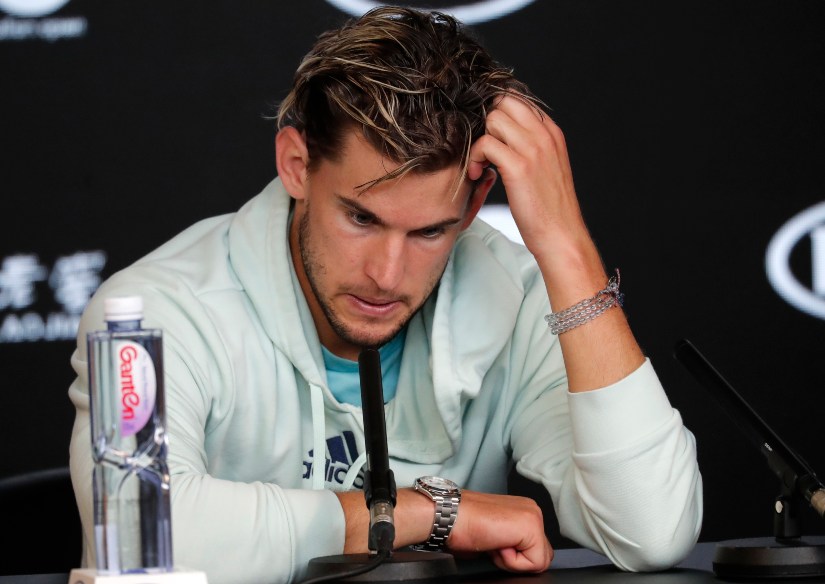 Thiem deserves kudos for refusing to shrink from the challenge, and he’s right about a Slam counting for more if it comes with the Big 3 still playing. Some might even say it’s grossly unfair to expect the youngsters to win a Slam against the Big 3, because that requires Big 3-level mental fortitude – which, as history has shown us, appears only about once or twice every generation.

But as unfair as the prospect might sound, there’s no way around it. As Thiem has discovered in his three finals, and as Daniil Medvedev discovered at last year’s US Open, you have no option but to walk through hellfire if you want to make a dent in the Big 3 stranglehold over the Slams.

Fortunately, there is an example of a player who managed to do that after years of toiling fruitlessly. Andy Murray lost his first four Slam finals, all to the Big 3, before finally getting Ivan Lendl on board and breaking through at the 2012 US Open. In fact, Murray suffered even more than Thiem in those early years; after his fourth final loss, at Wimbledon 2012, he couldn’t help but break into tears as he contemplated the magnitude of the challenge before him.

The biggest change that Lendl brought wasn’t anything technical; it was an improvement in his charge’s mindset. Before his US Open triumph, Murray either failed to stay with his more accomplished peers (like the 2012 Wimbledon final), or failed to show up at all (like the 2011 Australian Open final). There was a crying need to toughen up when the stakes were the highest, and the Scot and his coach recognized that in the nick of time.

The last game of the 2013 Wimbledon final, where Murray repeatedly threatened to choke his lead away but ultimately didn’t, was the perfect embodiment of just how much Murray had improved in the mental department.

Thiem for his part hired a new coach in Nicolas Massu last year, and physically speaking has gone from strength to strength since. He was already one of the fittest players on tour, but this year – after a rigorous off-season training regimen that would make you feel tired just by watching it – he seems like he can play endlessly. But the increased endurance may also have its pitfalls; the lack of urgency to wrap up matches means Thiem is always vulnerable to taking his foot off the gas after building a big lead. 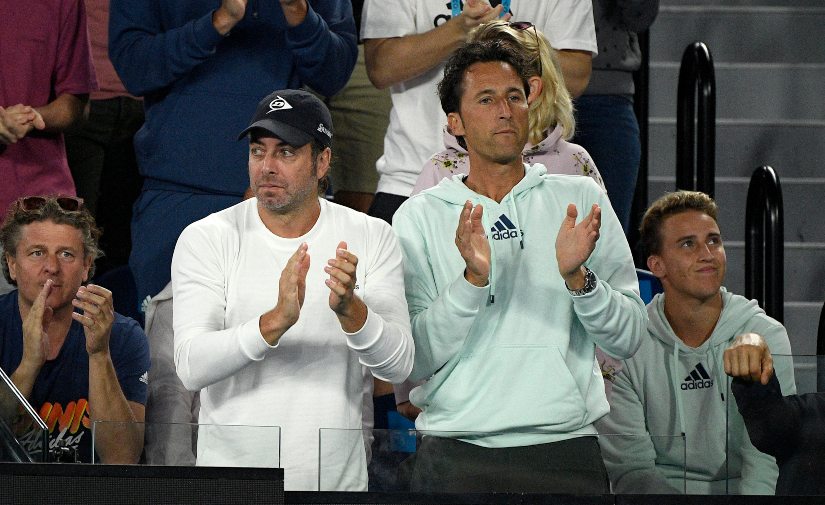 This fortnight in Melbourne he dropped sets to Alex Bolt and Taylor Fritz that he had no business dropping, and by the time he reached the semi-finals, we all realized he actually cannot play endlessly. Thiem wasn’t quite on top of his game against either Zverev in the semis or Djokovic in the finals; his racquet head speed wasn’t as high as it was in the Nadal match, nor was his movement as explosive.

“I think I've rarely felt physically that tired, especially now after all the tension's gone,” he said on Sunday night. “I played an unbelievable intense match against Rafa, such an intense match against Sascha in the semis. Today again I think almost over four hours. I think that was very demanding.”

The Austrian made 57 unforced errors in the final, and his inability to finish things off at the end was clearly tied to the miles he had accumulated on his body. Thiem fought admirably to stay with Djokovic in the deciding set, but he also looked distinctly more spent than his legendary rival.

We know that Thiem has the game, and we know that he has plenty of heart too. Now the next step for him and Massu is to develop a killer instinct that helps him finish matches when they are supposed to be finished. By stumbling at the final hurdle, and letting his opponents hang around longer than warranted, he is making an already difficult task infinitely tougher.

“Already now I feel a little bit of motivation to come back for the next Grand Slam,” Thiem said. “Well, if I have a little break, it's going to be bigger.”

Thiem was the personification of sadness throughout the trophy presentation and press conference, so it was heartening to hear that he’s already thinking of moving past this disappointment. But if you were to take his words purely in literal terms, it’s difficult to see how much ‘bigger’ his performance can get. Forehands like the one he hit against Zverev are pretty much the hardest anyone can hit; now he needs to think of being steadier rather than bigger.

There’s work to be done before Thiem can call himself a Slam champion. But after looking at the immense effort and spirit he showcased this year in Melbourne, does anyone doubt that he will get the job done eventually?