Djokovic vs Nishikori 6-1, *4-1. Novak Djokovic through to semis after Kei Nishikori retires

Djokovic breaks again. Nishikori takes off his cap and decides that he cannot carry on at his best. Djokovic gives him a hug and consoles him. The sizeable Japanese contingent gives him a thunderous applause nevertheless as he walks off RLA. Remember, Nishikori had spent 13 hours and 47 minutes on court coming into the semi-finals, the second-most among all the quarter-finalists. Djokovic, in contrast, had spent four hours less.

Djokovic wraps up the set in just 31 minutes with a love-hold. Nishikori calls for the trainer immediately to seek treatment on his right thigh. Hope it's nothing serious.

Pouille wins the first point with a crisp forehand winner. At gamepoint, Raonic opts to leave a Pouille shot at the net thinking that  it's floating beyond. The ball lands comfortably inside the line much to Raonic's frustration. Pouille gets a match point after Raonic sends a backhand to the net. Raonic conducts the next point from the net. He plays a delicate drop shot which Pouille tries to get to but can't return. Pouille gets another matchpoint with a ferocious backhand passing shot. Raonic saves it with a well-placed inside-out forehand winner. Raonic volleys wide to give Pouille a third matchpoint. Raonic hits his forehand wide to send Pouille's box into a frenzy. The Frenchman has made it to his Major semi-final.

Raonic gets two mini-breaks to take a 3-0 lead. The Canadian is pumped up now. He holds both his serves to go 5-0 up. Raonic breaks again to get six setpoints. Pouille saves one point on his serve after Raonic nets his return. Raonic whips a forehand off his ankles wide but finally converts at the third time of asking. We're going into a fourth set.

Pouille brings out the serve and volley to go 30-0 up and then hits a service winner to get three setpoints. He seals the set with a fiery ace out wide! This has been a comfortable second set for the 28th seed. The Frenchman takes a toilet break at the end of the set.

Raonic breaks back before Pouille fires in an ace. Raonic double faults to give Pouille the break. Pouille can't control Raonic's serve which kicks up on him. Pouille gets two setpoints with a crosscourt forehand winner. Pouille sneaks in a forehand passing winner beyond Raonic to win the set.

Pliskova goes 40-15 up but Williams claws her way back into the game with a pair of backhand winners. Pliskova gets a gamepoint with an ace but Williams fights back with good attacking play to get a set point. Pliskova nets her backhand to give Williams the break and the set. We're going into a decider!

Williams lets out a frustrated cry after missing a forehand volley. Pliskova takes a 30-15 lead with the old serve and volley. She gets two setpoints after Williams hits her forehand long. She fires in an angled ace out wide to clinch the first set.

Osaka vs Svitolina 6-4, 6-1. Naomi Osaka is through to the semi-final!

What a brilliant performance from the fourth seed! She was relentless right from the start and was helped along the way by Svitolina struggling with issues with her shoulder. Regardless, Osaka was the superior player on the day and is deservedly in her first Australian Open semi-finals.

An inside-out backhand from Osaka sets up an easy forehand winner for the fourth seed. She charges up to the net and goes 30-0 up with a forehand winner. A wide backhand from Svitolina gives Osaka three setpoints. She misses one by sending her backhand wide trying to aim for the corner ob Svitolina's forehand side. She lets out a shriek out of frustration after she squanders the remaining two setpoints. She makes no mistake on the next point with a vicious backhand return right in the corner. She finally gets the break and clinches the first set.

That's it from us here!

Here are the eight semi-finalists!

And here are the eight #AUSOpen semi-finalists!

Novak Djokovic through to the semi-finals!

"I wish him a speedy recovery."@DjokerNole sends his regards to his worthy opponent Kei Nishikori.#AusOpen pic.twitter.com/2n9XGj1Arg

Djokovic vs Nishikori 6-1, *4-1. Novak Djokovic through to semis after Kei Nishikori retires

Djokovic breaks again. Nishikori takes off his cap and decides that he cannot carry on at his best. Djokovic gives him a hug and consoles him. The sizeable Japanese contingent gives him a thunderous applause nevertheless as he walks off RLA. Remember, Nishikori had spent 13 hours and 47 minutes on court coming into the semi-finals, the second-most among all the quarter-finalists. Djokovic, in contrast, had spent four hours less.

Djokovic is running away with the match here. He holds to love again.

Poor execution from Nishikori at the net. First he sees his volleyed drop shot sail narrowly wide. On the next point, he smacks his forehand volley out from a promising position. A couple of unforced errors, his 24th and 25th of the match, hands Djokovic the break to love.

Djokovic holds to love. Nishikori is moving much better now compared to before. Looks like the physio has worked his magic.

Can the Japanese player rebound from his first set loss to #Djokovic?#AusOpen pic.twitter.com/41S5pxqP5t

Nishikori takes to the court with a heavily bandaged right thigh. Good start as he induces two errors from Djokovic but follows it up with a double fault. He pins Djokovic to his backhand before hitting a winner. He seals the hold after Djokovic nets his return.

Take a look at the stats from the first set 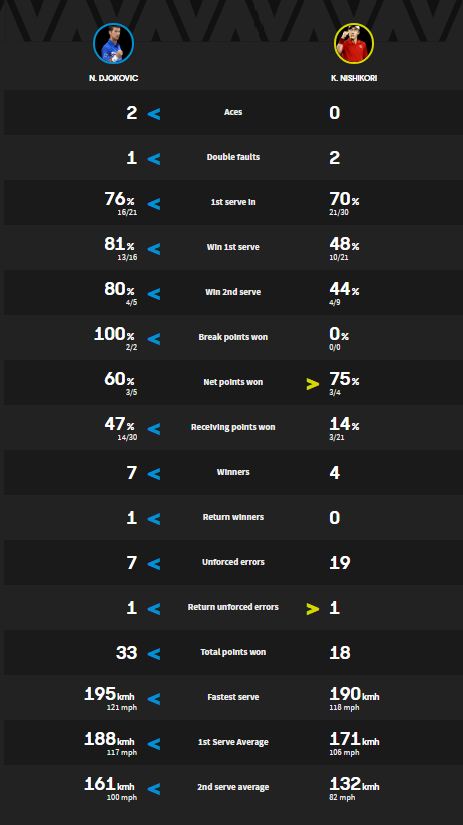 Djokovic wraps up the set in just 31 minutes with a love-hold. Nishikori calls for the trainer immediately to seek treatment on his right thigh. Hope it's nothing serious.

Marathon man Nishikori has already spent 13hr 47min on court in Melbourne this year, more time than any other player, coming through three five-set epics in his four matches so far.

He has twice clawed back from the precipice of being two sets down, the latest against Pablo Carreno Busta on Monday that went to a deciding super tiebreak.

Djokovic, after coming through his own draining late-night slugfest against Daniil Medvedev, said he knows what to expect from the eighth seed.

"Well, Kei won another marathon match," Djokovic said of the Japanese number one, who will be in his fourth quarter-final in Melbourne but is yet to reach a semi.

"Congratulations to him for fighting back from two sets to love down and break down. He's a fighter," he added.

Nishikori is unbeaten in eight matches this year after winning the Brisbane International, and although Djokovic holds a 15-2 win-loss record in head-to-heads he is prepared for another gruelling battle.

"He's a very talented player. One of the quickest players on the tour. You know, hard worker. Yeah, I expect a tough one," said Djokovic.

They have met five times in Grand Slams with Nishikori's lone win coming in the US Open 2014 semi-final.

Djokovic defeated Nishikori in the last eight of the Australian Open three years ago in straight sets and this will be their third consecutive major showdown.

With Roger Federer already out, Djokovic is the lone player remaining with a chance to earn his seventh Norman Brookes trophy.

Pouille, the 28th seed who will turn 25 next month, has a former Australian Open champion in his corner as he tries to reach a first Grand Slam semi-final .

The Frenchman split with his long-time coach Emmanuel Planque in the off-season and hired Amelie Mauresmo, who won the women's title in Australia in 2006.

He said she had helped him bring more variety to his game. "Yeah, that's one goal, to mix it up a lot and to be more consistent, especially from the baseline," said Pouille, whose previous best in majors was quarter-finals at Wimbledon and the US Open in 2016.

Raonic, the 16th seed, has blasted through the tournament on the back of his supreme serving, only dropping one set — to former champion Stan Wawrinka — in the second round.

Ominously for Pouille, the Canadian former world number three thinks he has improved since he achieved his highest ranking in November 2016.

"I think I'm a better player than I was back then," he said of developing a more aggressive serve-volley style since coming back from wrist surgery in 2017 and dropping outside the top 30.

"In the first five years of my career I probably only hit a couple thousand volleys," added Raonic, who has won all three previous meetings with Pouille, the most recent on grass in Stuttgart last year.