In July 1999, Mirjana Lucic-Baroni made the semi-final of Wimbledon at the age of 19. Venus Williams reached the quarter-finals of the same tournament but lost out to Steffi Graf, the eventual finalist. Two months later, Serena Williams won her first Grand Slam title at the US Open. CoCo Vandeweghe was seven years old. Now, all four women will be competing in the Australian Open 2017 semi-finals on Thursday.

Two unseeded players, two sisters. The first major of the year has produced some of the most compelling storylines in the sport, and we could still be in for a few more surprises. With a combined age of 130, the two contests will be intriguing mixes of experience and talent, ambition and age. Here’s a look at how the four semi-finalists performed so far. 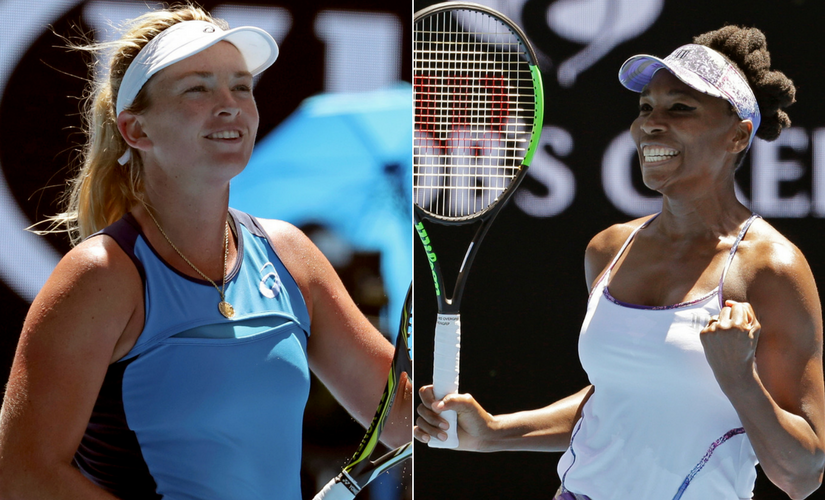 The first semi-final is an all-American affair between CoCo Vandeweghe and Venus Williams. AP

Venus has secretly discovered how to produce the Elixir of Life, because there seems to be no logical explanation to describe her ageless performance. The 36-year-old last made the final at Melbourne in 2003, and she is attempting to recreate that result after a gap of 14 years. She has defied time, injury and her own ageing body to exhibit breathtaking tennis and make the last four without dropping a set.

On her way to the semis, Venus has played only one seeded player – 24th Anastasia Pavlyuchenkova – as the other seeds in her quarter were knocked out. Regardless, her backhand has been on fire and her serve has improved with every game. Her victory in the fourth round was Venus' 50th win at the Australian Open, and she is the oldest player to reach a Grand Slam semi-final since Martina Navratilova in 1994 at Wimbledon.

Venus has defeated Vandeweghe in their only previous meeting – 6-4, 6-3 on clay in Rome last year, but she will be wary of the 25-year-old’s all-or-nothing approach in the semi-final. Venus has never lifted the Daphne Akhurst Memorial Trophy, but she believes that she could deserves to win it.

Her opponent, on the other hand, is aiming to make her first Grand Slam final. The 25-year-old Vandeweghe is enjoying the form of her life and has knocked out two reigning Grand Slam champions – Angelique Kerber and Garbine Muguruza – on her way to her maiden major semi-final.

Vandeweghe, who is ranked 35 in the world, completely demolished both her previous seeded opponents and is playing with an almost cocky sense of confidence and belonging. Vandeweghe’s strength lies in her powerful ground strokes, her pacey serve and her high risk strategy of going for winners on every other point.

The American may not have any prior Slam semi-final experience but she has super coach Craig Kardon in her box. Kardon coached Martina Navratilova to the 1990 Wimbledon title, led Lindsay Davenport into the top 10 and helped Mary Pierce to number five in the world.

This clash promises to be a sharp contrast between Venus' steely resolve and Vandeweghe's blusterous swagger. However, regardless of what ultimately triumphs, the final is assured to feature at least one American. 35-year-old Serena Williams and a 34-year-old Mirjana Lucic-Baroni will play off for a place in the final. AP

With all the shocks and upsets at this Australian Open, Serena’s quest for a record-breaking 23rd Slam title has almost been overshadowed. But she is still the leading favourite to emerge as the champion come Saturday. Serena has quietly, but ruthlessly, survived the carnage that all the seeds around her suffered and has reached the last four without being stretched to three sets.

And she’s had to beat the draw from hell to reach there. She overcame two former top-10 players – Belinda Bencic and Lucie Safarova – in her first two rounds. Then, she dismissed upcoming youngster Nicole Gibbs and dangerous Barbora Strycova in the next two matches, and finally dominated red-hot Johanna Konta to make it to her 10th consecutive Grand Slam semi-final.

Serena has history on her side, as she has never lost at this stage of the Australian Open, having won the title each of the six previous times she reached the penultimate round. Apart from creating history, the 35-year-old also has an added incentive, if she needs any, of the World No 1 ranking also in contention. If she goes on to lift the trophy on Saturday, she will recapture the top spot from Kerber.

Serena takes on 34-year-old Lucic-Baroni on Thursday, and the last time they met, Britney Spears had just release her hit single ...Baby One More Time. The American has won both their previous encounters in 1998, the first at Sydney in three sets, and the second in the Wimbledon second round, 6-3, 6-0.

For Lucic-Baroni though, those matches might as well have been part of some other lifetime. The Croatian was a teen phenom, with two junior Grand Slam singles titles to her name before her 15th birthday. However, she faded from the tennis scene in the early part of this millennium due to financial issues and an abusive father.

Lucic-Baroni eventually returned to the tour in 2007 and steadily made her way back up the rankings. Now at No 79, her fairytale run at this year’s Australian Open is a testament to her never-say-die attitude, sheer determination and her love for the game. On her way to the semi-finals, she ousted third seed Agnieszka Radwanska in the second round and fifth seed Karolina Pliskova in the last eight.

Lucic-Baroni hits the ball with menacing strength, and is capable of producing winners off both wings. Her physical endurance will be rigorously tested by Serena, but she will be able to match the American's power and ball-striking ability.

Eighteen years ago, Lucic-Baroni played her first major semi-final against a player with 22 Grand Slam titles (Graf) and ended up on the losing side. On Thursday, she once again will be up against a player aiming for her 23rd Grand Slam crown. Will history repeat itself in 2017? For a player who has rewritten her life, history matters little.