Stefanos Tsitsipas said he did not mean to hit his father and coach Apostolos with a racket swipe in a mid-match fit of rage during Tuesday’s ATP Cup loss to Australia’s Nick Kyrgios. 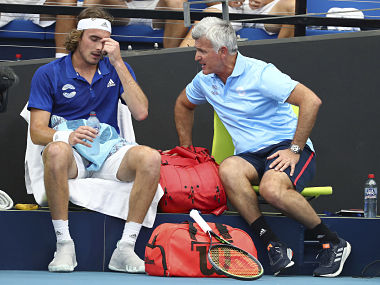 Stefanos Tsitsipas of Greece, left, talks to his team captain and dad Apostolos during the ATP Cup. AP

The Greek 21-year-old, ranked sixth in the world, lost 7-6(7) 6-7(3) 7-6(5) and took out his frustration after losing the opening set tiebreak with two racket swipes near the team bench, the second of which bruised his father’s arm.

Apostolos immediately got up from his chair in shock and went up to the stands to sit with the rest of the Greek team while Tsitsipas, who was docked a point and warned by the umpire, received an earful from his mother Julia Apostoli.

“It happened accidentally, I didn’t mean to do it and straight away forgot about it and moved on from there,” Tsitsipas told reporters. “It happens, I wasn’t aiming to do that. It just went out of control, unfortunately.

“Maybe I’ll stay in my room for three days, grounded by my father,” he added, laughing.

Here's the moment Stefanos Tsitsipas injured his Dad Apostolos when he smashed his racket!!

Kyrgios, no stranger to on-court outbursts, did not see the incident himself but said that it should not be getting too much attention.

“I’ve done some stupid things as well in the heat of the moment, so it was obviously an accident,” he said after Australia’s 3-0 victory saw them top the group.