After hitting the bar in the fourth minute, he opened the scoring two minutes later when he chipped Chelsea keeper Petr Cech with the ball going in off the post.

His second 13 minutes later was from a superb curling shot and his third just before halftime completed another rapid Atletico breakaway.

It was his second hat-trick in five days following the one he scored when Europa League winners Atletico beat Athletic Bilbao 4-0 in La Liga on Monday. 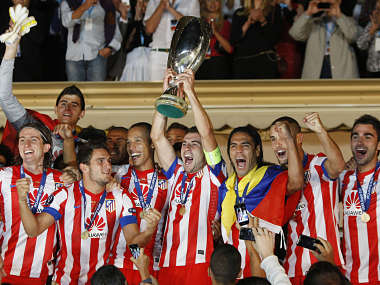 Miranda made it 4-0 after 60 minutes to make sure of the victory before Gary Cahill scored Chelsea's consolation when he fired in from close range after Atletico failed to clear a corner.

The final was the 15th and last to be played in Monaco before the game is moved around Europe in future years and like the majority of the last 14, it ended in a victory for the underdogs over the European champions.

Atletico became the ninth team who either won the old Cup Winners Cup or UEFA Cup/Europa League to beat the European champions and their victory was thoroughly deserved and could have been even more emphatic.

Chelsea defender David Luiz, who had a poor game, almost gifted Atletico a fifth in the 90th minute when his clearance rebounded off his own post but by then the outcome was inevitable.

Atletico, breaking from the back with pace and accuracy tore Chelsea's midfield to shreds with Adrian Lopez, Koke and Arda Turan finding Falcao with embarrassing ease.

Although Chelsea were without their suspended talismanic captain and centreback John Terry, they were still second best in almost every position and looked a shadow of the side that has started the Premier League season with three straight wins.

Former Atletico striker and self-confessed Atletico fan Fernando Torres hardly had a touch of the ball, but was hugged by some Atletico fans and most of the Atletico players after the final whistle.

While the match may have been bitter-sweet for Torres, it was also a significant one for Atletico's Thibaut Courtois, the 20-year-old keeper on loan from Chelsea for a second season at the Vicente Calderon.

He hardly had a save to make and could do nothing to prevent Cahill's late goal on a night that belonged to the Spaniards whose fans hugely outnumbered Chelsea's, with many of those in blue leaving long before the final whistle.