Singapore: India's star golfer Anirban Lahiri continues to lead the Asian Tour's Order of Merit despite a disappointing end to his campaign in the Philippines where he finished tied-22nd. 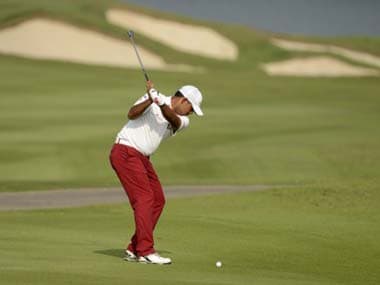 "I'm disappointed with how I played. I've been playing well but I don't think I played that badly. I made a lot of mental errors and big numbers. You can't make four double bogeys and three triple bogeys in a tournament. At least I tried to fight back and played well," said Lahiri.

The EurAsia Cup star, who contributed two vital points in the continent's draw with Europe in the Ryder Cup style event, will switch his focus to his wedding with long-time sweetheart, Ipsa Jamwal this month before getting back into action on the region's premier Tour next month.

"I'll be getting married and it is the beginning of my new life. I think it is really an exciting time for me. My golf bags will go into the store room for at least two weeks and I'm going to be fresh at Samui!" said Lahiri.

Meanwhile, Bangladesh’s Siddikur Rahman will be on a mission to fix his putting woes before he resumes rivalry with the region’s best golfers again.

A two-time Asian Tour winner and EurAsia Cup star, the Bangladeshi set himself up well for another grandstand finish by taking a share of the first round lead at the ICTSI Philippine Open last week. The 29-year-old was however let down by his putting and eventually had to settle for yet another second runner-up finish this season.

His earnings of $17,838 at the Wack Wack Golf and Country Club moved him five spots up to 13th place on the Asian Tour Order of Merit.

Having captured the imagination of fans in the region, Siddikur is hoping to create a similar impact when he attempts to play his way into the year’s second Major, the US Open next month.

“I’ll be going for the US Open Qualifying. I have good memory when I played on the same golf course in 2012. I’m really looking forward to it because it is my dream to play in the US Open,” said Siddikur.

Australia’s Marcus Both made the biggest move up the merit rankings with his career-changing win at the ICTSI Philippines Open by leaping 42 spots up to 11th place while Thailand’s Arnond Vongvanij played his way into the top-10 after a tied-second finish.

The Asian Tour will next head to the holiday isle of Samui for the sixth edition of the Queen’s Cup from June 5-8. The popular $300,000 Asian Tour event will be staged at the ultra-challenging Santiburi Samui Country Club.