Asian Games 2018: Jinson Johnson says he was not surprised when Manjit Singh beat him in 800m final

New Delhi: It was disappointing for Jinson Johnson not to win the 800m but the 1500m Asiad champion was far from surprised that compatriot Manjit Singh pipped him for the top prize in his pet 800m event.

"Yes, 800m is my pet event and definitely I would have loved to win gold in it. So, in a way I am disappointed but I am happy that two Indians won gold and silver instead of other countries winning them," Jinson told PTI.

"Moreover, I am not surprised at all that Manjit won the gold as there is no big difference in timing between him and me. In the past few years, in the National Championships, he has been my main competitor. I knew if I can win, he (Manjit) can also win," he added. 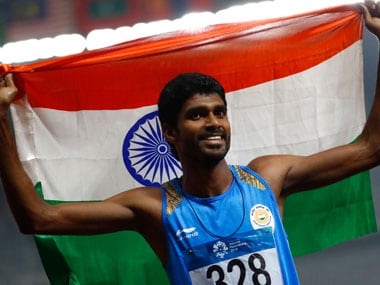 Manjit was behind two-three runners at the final bend but ran past Jinson and others in the final stretch to win the gold. Manjit ran a personal best of 1:46.15 while Jinson clocked 1:46.35.

"I felt a bit tight at the final stretch and could not preserve myself for a final burst which Manjit did. But it is all right, I am happy with my silver in the 800m."

Asked if the 800m title loss played out in his mind while running the 1500m in which he won a gold, Jinson said, "Not exactly. At this big stage, anybody can win any race. I was not thinking particularly about Manjit but was thinking about all the other competitors, that nobody should overtake me (in 1500m)," said the 27-year-old Kerala athlete.

Asked if he could have done better and improve upon his personal and national record time which he had clocked in Guwahati Nationals in June, he said: "The conditions were not perfect in Jakarta and I was more of thinking of winning the race than improving my time."

Jinson had broken legendary Sriram Singh's 42-year-old record of 1:45.77s during the National Inter-State Championships in June in Guwahati when he clocked 1:45.65s.
Jinson also downplayed the talk about his timing in 1500m bettering the 2016 Rio Olympics gold-winning timing.

He said:"Two things are there. One, this kind of races are tactical races and often timings of top athletes in big events like Olympics or World Championships may be below par. So, it is not appropriate to compare these timings.

"Secondly, when you run in an Olympic final race, you don't think about timings, you think about winning gold or other medals. If timing is good in the process that is well and good. If you see the timing of the semi-finals (in 1500m in Rio Olympics) the timings were world class, around 3 minutes 40 seconds," said Jinson who won the 1500m gold in the Asian Games with a time of 3 minute 44:72 seconds.

Jinson said he may produce a better time during the  8-9 September IAAF Continental Cup in Ostrava, Czech Republic where he will run for Asia-Pacific team. Only two top athletes from four regions -- Europe, Africa, Americas and Asia-Pacific -- will compete in each event in this international season-ending competition.

"It will be a world class field and the conditions will be good, so timings may be good," he said.

Women's discus throw bronze madallist Seema Punia had suggested that other athletes should follow her in helping flood-affected victims of Kerala with monetary assistance.

Asked if he would support this initiative, Jinson simply said, "The people of Kerala have suffered a lot due to this terrible flood. I am not being able to go home as I will be taking part in this Continental Cup. I will see what I can do to help the people of my state."

Besides Jinson, Neeraj Chopra, Hima Das, Sudha Singh, Arpinder Singh, PU Chitra and Mohd Anas will take part in the prestigious Continental Cup. Jinson, Sudha, Arpinder, Anas and Chitra are here ahead of their departure for Ostrava on 6 September.