Birmingham, United Kingdom: Defending champion Angelique Kerber made a typically tenacious comeback from a set down and a day’s delay to reach the quarter-finals of the Wimbledon warm-up event in Birmingham on Friday.

She did it with a 5-7, 6-2, 6-2 win over Daria Gavrilova, an improving young world number 50 from Australia who ended Thursday’s rain-ruined schedule within two points of snatching the first set.

She duly did that on Friday, capturing Kerber’s service game, which restarted with the titleholder 0-30 down. 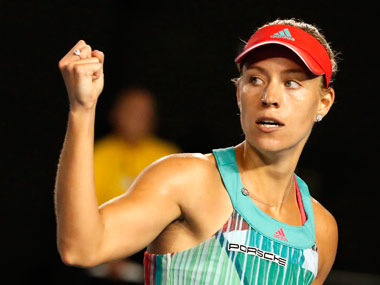 But thereafter the German displayed admirable motivation in still-damp conditions and found a good rhythm with solid ground-stroke hitting.

"It was good to turn around the match after all the rain and a day later," said Kerber, whose body language showed how determined she was not to follow several other big names through the exit.

"It’s always difficult to start again the next day so I am glad I found my rhythm again," she added. Earlier she told the crowd: "I love this tournament and I want to do well again."

Kerber has special reasons for feeling that. Since causing one of the biggest sensations in tennis history by beating Serena Williams to win the Australian Open in January, she has suffered five first-round losses, due perhaps to extra focus on off-court commitments.

Her only success since then has involved a title defence at Stuttgart in April.

The stormy conditions have made it among the most testing in the Birmingham grasscourt tournament’s 35-year history.

They also caused a logjam to the schedule which require Kerber to return for her quarter-final later on Friday.

They probably contributed to the early demise of top seed Agnieszka Radwanska, Petra Kvitova, the two-time Wimbledon champion, and Belinda Bencic, the 19-year-old fourth-seeded Swiss who is the youngest player in the world’s top 10.

The fifth day did however bring an improvement in the weather forecast and Carla Suarez Navarro, the sixth seed from Spain, took advantage to similarly recover from a set down.

Navarro was even closer to defeat overnight against Andrea Petkovic, another German, who began today just needing to win the second set tie-break to close the match out.

Navarro's intelligent rallying narrowly denied Petkovic 7-5 in the tie-break and then, despite letting slip an early break of serve in the final set, Navarro somehow sneaked another tie-break, from 4-5 down.