A 125-year-old mystery surrounding the scorer of the world's first league goal has ended with the publication of a new book identifying James Kenyon "Kenny" Davenport of Bolton Wanderers as the man.

This season marks the 125th anniversary of the League and researchers were determined to establish the scorer of the first goal which had been widely credited as an own goal by Aston Villa's Gershom Cox against Wolverhampton Wanderers. 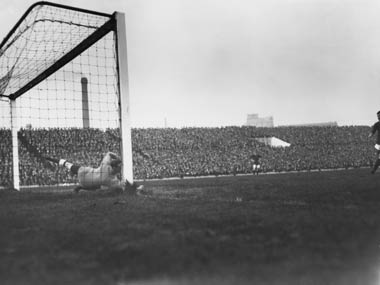 A photo from an English football league match taken in 1913. This is a representational image. Getty Images

The breakthrough came when Robert Boyling, a researcher at a newspaper library, discovered an advert showing that the Villa match kicked off half-an-hour later than previously thought, at 3.30 pm.

The kickoff time of Bolton's match was always known to be 3.45pm and Davenport scored after two minutes.

Cox's own goal came after 31 minutes of the Villa match so could not have been scored until one minute past four.

"Everyone in Bolton knew exactly who Kenny Davenport was - a working class lad who was happy to be playing football for a living and also to represent his country," Mark Metcalf, the book's author, told reporters.

"I don't think he would have had any idea of how significant his goal was."

This weekend's opening league fixtures herald the start of the anniversary season with six of the original 12 founder members playing each other using a special commemorative ball.