New Delhi: In a shot in the arm for the AAP government, the Delhi High Court on Monday termed as "suspect" the Centre's recent notification barring Delhi government's anti-corruption branch (ACB) from acting against its officers in criminal offences and held that the LG cannot act in his discretion.

The High Court noted that Lieutenant Governor of Government of National Capital Territory of Delhi (GNCTD) is bound to act upon the aid and advice of the council of ministers who are directly elected by the citizens of Delhi and the Centre's "executive fiat" siding with him is "suspect".

It observed that mandate of the people "must" be respected by the LG of GNCTD if there was no other "constitutional or legal fetter".

The findings were part of a judgement in which the high court held that the anti-corruption branch of the NCT government has the jurisdiction to arrest policemen. 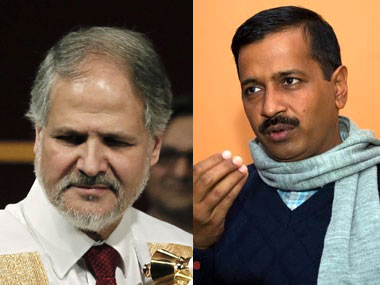 The AAP government in Delhi and the Lt Governor have been involved in a public spat over his powers vis a vis an elected government. The Centre had on May 21 issued a notification siding with the Lt Governor.

The High Court dismissed the bail application of a head constable, who was arrested by the ACB in a corruption case.

"After the judgement was reserved in the present application, the Ministry of Home Affairs has issued a notification...on May 21, 2015 thereby further amending the notification dated November 8, 1993 and, inter alia, providing that 'ACB police station shall not take any cognisance of the offences against officers, employees and functionaries of the
Central Government'.

"In my view, since the Union lacks the executive authority to act in respect of matters dealt with in Entries 1 & 2 of List III of the Seventh Schedule, the further executive fiat issued by the Union Government on May 21, 2015 is also suspect," Justice Vipin Sanghi said.

"The mandate of the people, with whom the sovereign power resides, must be respected by the Lieutenant Governor in respect of matters which fall within the domain of the legislative assembly, provided there is no other constitutional or legal fetter.

"Therefore, in respect of matters dealt with by Entries 1 and 2 of the Concurrent List, the Lieutenant Governor cannot act in his discretion, and he is bound to act upon the aid and advice of the Council of Ministers," the judge said.

The executive power of GNCTD as well as legislative power of legislative assembly here with respect to investigation of a crime stems from entries 1 and 2 of the concurrent list of the seventh schedule.

Entry One deals with criminal law including all matters related to IPC but excluding offences listed in List I or List II. Entry two is about criminal procedure, including all
matters included in the code of Criminal Procedure at the commencement of the Constitution.

The High Court dismissed the bail plea of Head Constable Anil Kumar saying that his submission that the ACB of the GNCTD does not have the competence or jurisdiction to act on
the complaint of the complainant is rejected.

"Since the applicant is a Delhi Police personnel serving the citizens in the NCTD and the functions of the Delhi Police personnel substantially and essentially relate to the affairs of the GNCTD, in my view, the ACB of the GNCTD has the jurisdiction to entertain and act on a complaint under the PC Act in respect of a Delhi Police officer or official, and to investigate and prosecute the crime. This would also be in consonance with the guidelines issued by the CVC," the judge said.

The head constable was arrested on May 2 from the Sonia Vihar police station in Northeast Delhi by the ACB.

He was arrested after a scrap dealer filed a complaint on the anti-corruption helpline 1033 that Kumar had been demanding Rs 20,000 as bribe and threatening to implicate him
in false cases.

Following the arrest, Kumar's wife filed an FIR of kidnapping prompting the Delhi Police to send a notice to the ACB to join investigations.

The ACB, however, sent a counter-notice to the Delhi Police asking the SHO of the Sonia Vihar police station to join investigations. The SHO has since been sent to the district lines.