At the informal meeting, Rajasthan's Ashok Gehlot told MLAs that he would try to convince Rahul Gandhi 'one last time' to contest and return as Congress president. If not, then he will run for the post

Rajasthan Chief Minister Ashok Gehlot, 71, has emerged as one of the contenders for the Congress president's position. PTI

Will he or won’t he? That seems to be the question on everyone’s minds about Rajasthan Chief Minister Ashok Gehlot contesting the polls for the position of Congress president.

A meeting held at his residence on Tuesday night, however, has given signals of what his next move will be and if he will, in fact, contest for the post of Congress president.

Here’s a lowdown of what exactly happened at the 10 pm meeting and what it means for the party.

On Tuesday, after hosting MLAs for a dinner to felicitate Vice President Jagdeep Dhankhar, Ashok Gehlot convened an informal meeting of the Congress Legislature Party.

It is reported that Gehlot told the MLAs that he was a loyal party man and would abide by whatever decision the leadership takes. He told them he would meet Sonia in Delhi today and then would fly down to Kerala to meet Rahul Gandhi to convince him “one last time” to contest and return as Congress president.

He added that if Rahul did change his mind he would do what the party asks him to do.

In the meeting, Gehlot told Congress MLAs that they would be asked to come to New Delhi if he decided to file his nominations for the party president election, said State Food and Civil Supplies Minister Pratap Singh Khachariyawas.

Food and Civil Supplies Minister Pratap Singh Khachariyawas further told reporters, “The chief minister said that if he files nomination for the party’s national president post, then legislators will get a message to reach New Delhi.”

He said there is no anti-incumbency in the state and the chief minister was not away from people.

The process of filing nominations for the organisational elections in the Congress begins on 24 September and will end on 30 September, and Gehlot is increasingly being seen as a top contender for the post of the party’s national president.

The last date for withdrawal of nominations is 8 October and the election, if required, will be held on 17 October. The results will be out on 19 October.

Gehlot, the 71-year-old leader, has in recent times emerged as one of the contenders to take up the mantle of Congress chief — a first non-Gandhi to take up the post in over 20 years.

It has been reported that the Rajasthan chief minister will be contesting the polls for the party top post against Thiruvananthapuram’s Shashi Tharoor, who met Sonia Gandhi on Monday and expressed his desire to run for the post.

However, Gehlot has appeared reluctant to give up his Rajasthan post.

Sources close to Rajasthan CM Ashok Gehlot say, rather than thinking of running for Congress President he is trying to persuade Rahul Gandhi to do so. He remains a loyal soldier of Sonia and Rahul Gandhi.

It has been said that Gehlot is averse to handing over the chief ministerial position to his former deputy and rival, Sachin Pilot.

Interestingly, the Tuesday meeting came in the absence of Pilot, who left for Kerala to join the Bharat Jodo Yatra on Tuesday afternoon.

NDTV citing sources has reported that if Gehlot moves to the national stage, he wants a loyalist to rule as his proxy in Rajasthan. If not, then he wants to keep both roles by taking over as working president of the Congress with Sonia Gandhi as full-time chief. 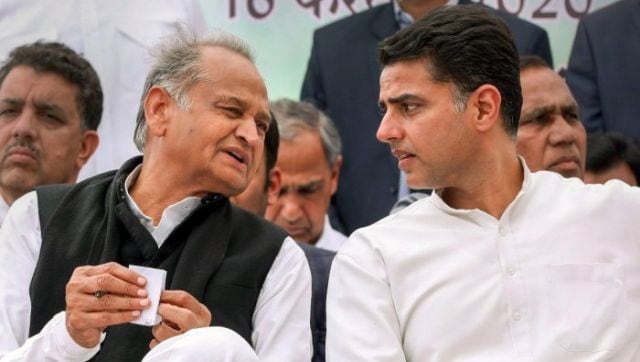 Ashok Gehlot is averse to handing over the chief ministerial position to his former deputy and rival, Sachin Pilot. PTI

That the two leaders from Rajasthan don’t see eye-to-eye isn’t a new fact. The rivalry goes back to 2018 when both — Gehlot and Pilot — were in an intense race to become chief minister after Congress won the Rajasthan Assembly elections.

The Congress chose Gehlot as chief minister for the third time while Pilot was made his deputy, a post he lost after his rebellion.

The united colours of Rajasthan! pic.twitter.com/D1mjKaaBsa

Since then the two influential leaders have been gunning for each other, exchanging barbs. After the Lok Sabha election in 2019, the chief minister said Pilot should take responsibility for the rout — the party lost all 25 seats — and more for the loss of his son, Vaibhav Gehlot, in Jodhpur.

Pilot didn’t take this lying down. He said if Gehlot had campaigned across the state instead of spending too much time in Jodhpur alone, the results could have been different.

The matter came to a head in 2020. Pilot rebelled against Gehlot and shifted to Delhi with 18 MLAs. The standoff ended only a month later after the Gandhis intervened.

The in-fighting doesn’t bode well for the Congress in the state, which will go to the polls next year. The party has governments only in Rajasthan and Chhattisgarh, but in both the state, the party has seen leadership tussles.