Why Jayalalithaa won’t find it easy to release Rajiv's killers

The state government of Tamil Nadu headed by AIADMK leader J Jayalalithaa will not find it easy to release the seven convicts in former prime minister Rajiv Gandhi’s assassination case.

This is what Jayalalithaa told the state assembly on Wednesday, "The cabinet has taken a decision to release the three convicts, Perarivalan, Murugan and Santhan, along with those four, Nalini, Robert Pyas, Jayakumar and Ravichandran who are undergoing life sentence. The decision will be conveyed to the Centre for appropriate action. If we don't get their response in three days, we will release all convicts in accordance with the rights granted under Indian Constitution." 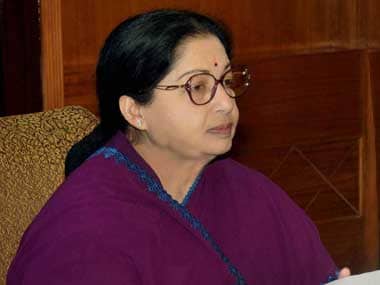 But there are several slips between the cup and the lip before Jayalalithaa can take her shrewd political move to its logical conclusion.

First, the Centre itself can spoil Jaya’s party by opposing her move, though it is yet to be seen whether it will be an effective enough veto should the Centre decide to take this path in the first place. It will be a tough call for the Congress in the poll season to make such a move and annoy the DMK, its erstwhile ally for close to a decade; more so because the Congress is keen to sew up a pre-poll alliance with the DMK in Tamil Nadu. This is a grey area and one cannot rule out the possibility of the Centre doing nothing, allowing the three-day period to lapse and letting Jayalalithaa walk her talk and the face music from the apex court.

Second, the Supreme Court may take a suo motu view of the Tamil Nadu government’s move and intervene. Such interventions by the apex court are a rarity.

Three, someone may move the Supreme Court seeking the court’s direction to restrain the Tamil Nadu government from releasing the seven convicts.

The last scenario may well happen and throw a spanner in Jayalalithaa’s works. The man who may do so may well be none other than the irrepressible Subramanian Swamy who has humbled Jayalalithaa in the courts several times in the past.

Swamy told this writer that he was firmly opposed to the Tamil Nadu government’s view. But he did not give a categorical yes or no on whether he would be moving the apex court in this regard. He said he would decide only after seeing what the Central government does in the next three days.

"Jayalalithaa is a clever woman. She has put Sonia Gandhi and her UPA government in a royal fix," Swamy remarked in a conversation with this writer.

Swamy said the Jayalalithaa government had no authority to release the seven convicts as such a move would be a gross violation of the Criminal Procedure Code (CrPC), 1973, particularly Section 435 of CrPC.

This is what Section 435 CrPC says:

(1) The powers conferred by sections 432 and 433 upon the State Government to remit or commute a sentence, in any case where the sentence is for an offence-

(b) which involved the misappropriation or destruction of, or damage to, any property belonging to the Central Government, or

Swamy elaborated by saying that under the law a convict cannot be given remission twice. Murugan, Santhan and Perarivalan have just been given clemency by the Supreme Court which commuted their death sentence into life imprisonment on Tuesday. Nalini’s death sentence was commuted to life imprisonment years ago after Priyanka Gandhi’s surprise visit to the Velore jail where she had a private meeting with Nalini.

Swamy’s combative mood may well rock Jayalalithaa’s boat. He has already stopped the DMK government of M Karunanidhi which wanted to release Nalini from the prison after she had completed well over 14 years in jail. On 6 April 2010, the Madras High Court had refused to give its nod for Nalini’s release from the prison.

Following is the operative part of the Madras High Court judgement in Nalini’s case: "The appellant (Nalini) being originally awarded with death sentence and her sentence was commuted to one of life imprisonment purely under humanitarian grounds, she constitute(s) a distinct class and cannot claim equality with those sentenced to life imprisonment. The appellant, a life convict in a crime that was cunning in conception, meticulous in planning and ruthless in execution in taking away the life of the former Prime Minister of India, cannot seek premature release, as of right, though she got a right to seek for consideration of her plea."