Symbolism vs substance: Why Dalit politics is about icons

Ask Ramdas Athavale, the most visible Dalit leader who runs a Maharashtra-based political party, the Republican Party of India (Athavale) if he would consider converting the 12-acre Indu Mill land into a huge complex for Dalit students instead of a memorial, the kind behen Mayawati built across Uttar Pradesh.

Chances are he would at best giggle and say something namby-pamby for the record, and persist with the idea of a ‘grand’ memorial though the late BR Ambedkar had spoken strongly against idolatry. The chairman of the Indian Constitution’s drafting committee had spoken of how “hero-worship is a sure road to degradation and eventual dictatorship.”

Dalit students coming to Mumbai for higher education are left stranded in poor accommodation, including in slums. Several thousand decent, even if minimally furnished accommodation, and well-run rooms in the heart of the city would assist what the late Ambedkar wanted the Dalit masses to do: educate themselves. The ‘unite and agitate’ element in his three-point call followed ‘education’. 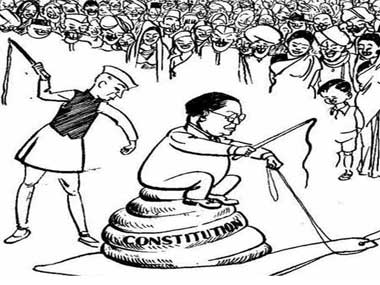 The Ambedkar cartoon that is in the centre of a big controversy.

But Ramdas Athavale has been in the forefront of the demand for withdrawal of the NCERT textbooks with the Shankar cartoon on Ambedkar on a snail with Jawaharlal Nehru behind him with a whip. He has upped the ante, by condoning the attack on Suhas Palshikar’s office and also demanding his and Yogendra Yadav’s arrest. He is doggedly at it.

The entire politics of the Republican Party’s various mutations, dividing only to multiply, has been based more and more on Ambedkar as a cult figure because it is the easiest to do. Having split time and again, their strength as a political force depleted, they have involved themselves in idolatry of an iconoclast.

The peculiarity of RPI – it describing the spectrum which once was one entity when formed in 1957, a year after Dr Ambedkar’s passing away – is that it is now not Dalit-centric but Dalit leader-centric. The trend has ceased to amuse the cadre. Most of the Dalit who embraced Buddhism en masse were mostly Mahars from Maharashtra and they followed into the RPI. After initial hopes and occasional gains, there is now nothing to look forward to except for watching the leaders play their power games.

Once it was Athavale’s entry into a state cabinet, election of him and three other RPI leaders who necessarily are neo-Buddhists as MPs from non-reserved seats, Ambedkar’s grandson Prakash’s faction wresting the same concessions for the neo-Dalits as are available to others among the Scheduled Castes and his entry into the Rajya Sabha, there is nothing much else to show for it. The raison d’etre for the party has been their leaders’ interests; RS Gavai even went away to Kerala as a Governor. Quid quo pros are a fact of the dynamics of all RPI factions.

All of them are now personality based. For a disenchanted cadre which cannot even get a person into Mumbai’s civic body, the past includes only Ambedkar’s memory and his deification. The struggle that was proposed and waged earlier has evaporated. All that matters is, for instance, Athavale not getting a ministership in the UPA-I; he sulks and shifts to support the Shiv Sena and the BJP which he once called communal.

There were, of course serious debates and conflicts as recently as 1990 when a year after a grand reunion, they broke up on the question of whether they should back VP Singh or the Congress in the general elections. Now, sliding into bed with a former ideological rival has come easy to Athavale much to the disapproval of the cadre. They did not vote as he wanted in the Mumbai civic elections and he is not a highly rated politician anymore for the Sena-BJP. They may have limited uses for him.

The splits and unities since 1957 have only depleted their corpus of trust even among the neo-Buddhists. Though Ambedkar had sought a liberal pan-Indian political party after his Scheduled Caste Federation set up in 1942, and he ideated the RPI, the latter was formed a year after his death, in 1957. It split, the famous Dalit Panthers being one of the faction but with a great impact using literature as a means for its rights.

The factions led by Gavai, Khobragde, BC Kamble, Prakash Ambedkar, among others, united in 1989, having been sapped by their disunity for 22 years. But they could not stay under one
ideological roof for more than a year but given the compulsions of electoral politics, got together again, in 1995 only to split again. Since then, there have been, despite the cadres fasting to demand the elusive unity. That is because personal political ambitions had taken a vice-like hold of the leaders.

In such a situation, the natural thing to do is emphasise on emotions. The other is to promote lumpanisation of the cadre where ideology has little or no relevance which is best possible in urban spaces. The word is that many of the karyakartas of the RPI’s various factions flit between one builder-developer and another in the slum rehabilitation space because most of the base is from that strata – as is to be expected given by their centuries of suppression and exploitation, than work on RPI’s agenda.

The veneration of their leader they call mahamanav and the leaders’ ambitions are best matched that way. Their numbers are such in every constituency, assembly or Lok Sabha that a victory in a seat is possible not on their own strength but in alliance with another larger political party. That makes them amenable. So deals are germane to the issue of the leaders’ survival.

One deal now is to get a memorial – the grandest, most visible, amid the genteel and up market area. It is like doling out cakes to those who cannot afford bread. The idea is to let the masses have something to cheer about.

That explains why Athavale will not opt for a hostel in Dadar and will insist on a grand memorial.