Polling for the fourth phase of West Bengal Assembly polls, which will decide the fate of several Trinamool Congress ministers, began this morning with unprecedented security arrangements.

Early footage from TV channels showed Central forces patrolling the lanes and bylanes of each ward.

Bhawanipore turned out to be the early eye-grabber, reports Firstpost's Sreemoy Talukdar, with a voter arriving at a booth to discover that his name was included in the list of dead.

In Behala east, reports have emerged that the wife and children of an independent candidate have been beaten up. Local TV channels reported that the candidate's wife and daughter also received rape threats from alleged TMC-affiliated goons. Kolkata Mayor Sovon Chatterjee, the sitting MLA and president of South 24 Parganas district, TMC, has denied the allegations but Ambikesh Mahapatra, his rival, said cops are shielding the goons.

Mahapatra, the Jadavpur University professor who was jailed for circulating online a cartoon of Mamata, said the Haridebpur OC is not doing his job.

Polling began for 53 constituencies in the fifth and penultimate phase on West Bengal assembly polls on Saturday.

Voting began at 7am for 31 constituencies in South 24 Parganas and 18 in Hooghly districts besides four in South Kolkata.

The Election Commission has cracked the whip, ordering the district administration to file FIR against two TMC leaders: Udayan Guha and Rabindranath Ghosh.
Candidate from Natabari constituency in Cooch Behar, Ghosh was caught on camera barging inside polling booth and threatening a sector officer. He even accused the officer of acting as a CPM tout. Taking suo motu cognizance of the event, the EC had sought a report.
Guha, who is contesting from Dinhata constituency on a TMC ticket, has been charged with aiding proxy voting.
Meanwhile in Kaliachak, Malda, two brothers were shot at by an assailant allegedly linked with the ruling party. They have been admitted to Malda Medical College hospital and have been operated on. Family members say the duo were targeted for their links with CPM.

People wait in queues to cast votes at a polling station in Cooch Behar during the final phase of West Bengal Assembly elections on Thursday. 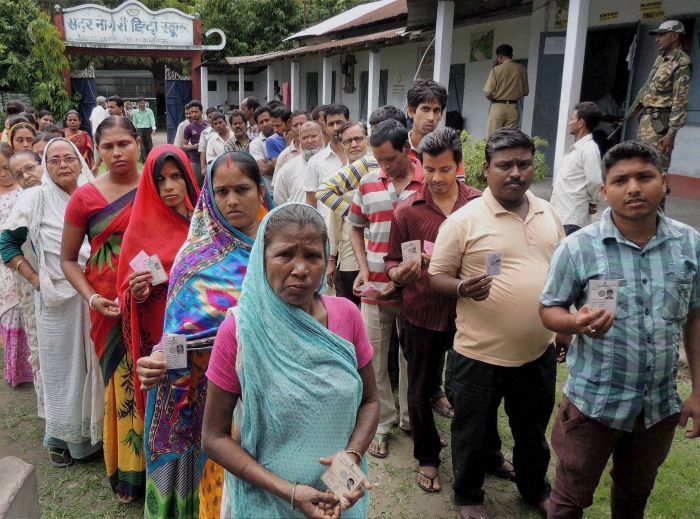 TMC candidate Rabindra Nath Ghosh was on Thursday allegedly caught on camera threatening a polling officer inside a booth. Taking cognizance of the media report, the Election Commission has sought a report from the district administration.

In a video broadcast by a TV channel, Ghosh is seen entering a polling booth in Cooch Behar's Natabari constituency, from where he is contesting, and verbally intimidating the official. "You are acting as a CPM tout; you are here to indulge in touting for the CPI-M?" Ghosh is heard saying and asking the official's name and where he was employed.

As the official says he is posted at a primary school, Ghosh retorts: "Oh, primary school! that will serve me better." He then moved out of the booth and while boarding his car, he is seen threatening a polling agent for being a "CPM tout".

In the final and sixth phase of the West Bengal Assembly election, voter turnout till 3 pm was recorded at 74.15%

Reports of "central force excesses" poured in from different parts of the two districts (East Midnapore and Cooch Behar) that went to polls in the sixth and final phase of West Bengal Assembly polls on Thursday.
In Janubasan area of Tamluk, the district headquarters of East Midnapore, a five-year-old boy was allegedly injured when paramilitary jawans tried to disperse a crowd near booth no. 94 leading to massive protest from locals.
Abdul Kader, the TMC councilor of ward no.14 in Haldia reportedly suffered a hand fracture when CRPF jawans wielded their batons. Six other TMC workers were also injured. According to the forces, the TMC leader and his men had broken the 100-metre rule of not being allowed to assemble near a booth.
A similar incident was reported from Sitalkuchi, an administrative block in Mathabhanga subdivision of Cooch Behar. Five TMC supporters including two women were reportedly injured when jawans lathicharged on them. Once again, CRPF said they were forced to take action when the group of supporters refused to leave the vicinity of a booth despite repeated warnings.
In Khejuri, villagers damaged a road in protest against alleged excesses of jawans when six TMC workers were hurt by lathicharge.
In Moamari, Cooch Behar, CPM worker Azizul Haq was beaten up by bamboo sticks and stones by alleged TMC activists while returning home after casting ballot. His family members were also threatened, report local TV channels.

In the 51 erstwhile enclaves in Cooch Behar, over 9,000 enthusiastic voters, including three centenarians, voted for the first time since the country's Independence. Thousands turned up in East Midnapore's over 4,000 disabled voter-friendly booths, aided by the Election Commission's special initiatives.

In East Midnapore's Moyna seat, the CPM alleged that its polling agent's house was broken into and vandalised by Trinamool Congress supporters. The Trinamool, in turn, accused the Congress of overwhelming several booths in Moyna constituency in the district.

Five Trinamool workers were reportedly detained in the assembly segment on the charge of intimidating voters.

In Nandigram, the Opposition accused the Trinamool of intimidating and threatening their agents.

According to latest Election Commission  data, 61.88 per cent votes have been cast till 1 pm in the sixth and final phase of polling in West Bengal. Cooch Behar witnessed a polling percentage of 58.81 while for East Midnapore, the figure stood at 63.61, reports Firstpost's Sreemoy Talukdar.

The incident took place near booth numbers 255 and 266 in Deubhanga when CRPF jawans wielded their batons to disperse TMC workers gathered around the booths. The ruling party claimed that they had maintained a distance of 200 metres away from the polling area. Section 144, was, however, imposed in the area.

Similar complaints were made by TMC in Natabari constituency of Cooch Behar where four party workers were beaten up when central forces lathicharged to disperse 'unlawful assemblies' near booth numbers 173, 178, 180 and 182.

In East Midnapore's Khejuri, TMC workers were caught trying to influence voters with fake EVM machines. According to reports in local TV channels, supporters of opposition parties were warned against stepping outside to vote in Satsimli village. The ones who did were intercepted on the road leading to the booth and 'tutored' on which button to press.

Meanwhile, the TMC has complained to the EC against BJP for holding a press conference on polling day. Mamata Banerjee's party said it was an attempt to influence voters.

Police officer emerges as hero in an election marred by threats

Almost straight out of a Bollywood script, a police officer emerged as the hero as voting touched midpoint in the sixth and final phase of West Bengal Assembly elections.

Amid reports of voter intimidation from Mytore, a hamlet in Panskura (west) constituency under East Midnapore, officer Mohammed Bilal Hossain was seen going door-to-door and trying to allay the fears of local residents who were visibly scared stiff. "Don't be afraid. We are here to help you," the officer was seen in footage from local TV channels. "Who has threatened you, tell me their names," asked the officer to voters, many of whom refused to identify themselves for fear of retribution. Some broke out in tears. Hossain also gave a local CPM agent a ride in his jeep and escorted him to the polling booth from where he was driven out.

TMC candidate from Nandigram Subhendu Adhikari, one of the leaders whose name featured in the infamous Narada sting videos, dismissed all claims of voter intimidation, however.

In an interview to 24 Ghanta, Adhikari said the charges were "concocted and voting was extremely peaceful." Though reports emerged of voters being threatened in many areas of Nandigram including Khejuri, Mytore and Haldia, Adhikari said these were baseless reports.

"The central forces have created a reign of terror. We have understood their strategy. Accordingly, we changed our tactics," the TMC strongman said.

Kolkata: Polling for the fourth phase of West Bengal Assembly polls, which will decide the fate of several Trinamool Congress ministers, began this morning with unprecedented security arrangements.

Voters were seen lining up before 12,500 polling stations in 49 seats in North 24 Parganas district, including Bidhan Nagar, and Howrah district as polling began at 7 am.

The polling will continue till 6 pm. An estimated 1.08 crore voters were eligible to exercise their franchise to decide the fate of 345 candidates, including TMC ministers Amit Mitra, Purnendu Basu, Chandrima Bhattacharya, Bratya Basu, Jyotipriyo Mullick and Aroop Roy to choose from.

Of the total contestants only 40 candidates are women.

Meanwhile, in the wake of reports of violence in the third phase of polling which left at least one CPI-M worker dead, the Election Commission has made unprecedented security arrangements for this phase.

Altogether 90,000 security personnel including central armed forces have been deployed. Special intervention includes patrolling in night and even on river, which is being done for the first time in this elections.

Special focus is being laid on Salt Lake area (Bidhannagar) in the northern part of city, EC officials said.

The central force contingent includes 672 companies who will be assisted by a 22,000 strong team of state police personnel.

To keep a strict vigil on the law and order situation, five police observers, all of IAS ranks, have been deployed in the two districts.

Besides, another 1100 mobile surveillance teams will be doing additional monitoring work.

Based on inputs from the electorate, about 5500 voters have been identified as vulnerable voters who received threats or intimidation from about 1500 trouble mongers.

Around 1400 of the history-sheeters have been "bound down" by the district authorities.

All eyes will be on jailed former Transport and Sports minister Madan Mitra, who is contesting from Kamarhati seat in North 24 Parganas district.

Mitra was arrested by CBI in December 2014 in the multi-crore rupee Saradha chit fund scam. This is the first time that a high-profile candidate is fighting elections in West Bengal from jail.

Interestingly, despite being a registered voter he will not be allowed to cast his vote because of incarceration.

Greenhorns in the fray in this phase include former BCCI President Jagmohan Dalmiya's daughter Vaishali and former Bengal cricket captain Laxmi Ratan Shukla - both of whom are fighting on TMC tickets.

Shukla is pitted against actress-turned-politician Rupa Ganguly of BJP from north Howrah seat.

Footballer Dipendu Biswas has been fielded by TMC from south Basirhat seat which is being defended by BJP's lone sitting MLA Shamik Bhattacharya.

Bidhannagar Mayor Sabyasachi Dutta is fighting for his seat from Rajarhat New Town.

Two other phases of the six-phase long Bengal election will be held on 30 April and 5 May while results will be out on 19 May.