In the past 43 years, 'Sainbari' has gone from being a spine chilling testimony to the turbulent underbelly of West Bengal's politics to a name that hardly rings a bell for a great number of politically opinionated people in the state.

On March 17, 1970, the Sain family in Burdwan was witness to violence that would go on to become election lore for many years in come in Bengal. Complaints registered with the police said that CPI(M) goons first set the Sain's house (Sain bari in Bengali) on fire. Then they barged into the house and killed three members of the panic stricken family. The eldest son's eyes were gouged out, another hacked to death and the third chased across the neighbourhood and butchered in a neighbour's house he tried to hide in. The young tutor of the Sain family's small children, who was present in the house at that time, was stabbed to death.

A year after the carnage, the eldest son, then blinded and defenceless as a result of the previous attack, was literally chopped to pieces. Beyond the police records, gruesome details of the attack dominated political conversations for years. How the inebriated, murderous CPI(M) mob celebrated the murders with the corpses lying around, how they mixed rice in the blood of the massacred victims and tried to feed it to the women of the family. Yet, the CPI(M) overthrew the Congress government and came to power  a few years later. Allegedly, one of the accused in the case, Nirupam Sen, went on to become the state industries minister. 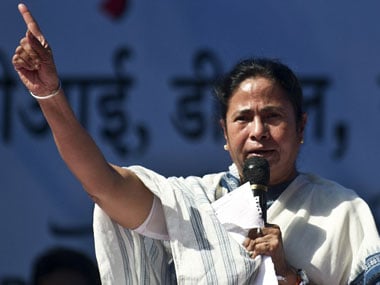 Mamata Banerjee's TMC has turned out to be an equally violent party. AFP.

The CPI(M) held power at for 33 years before the Trinamool Congress ended it.

Interestingly, while allegations of corruption, nepotism and complacence had been levelled against the party for a long time, it was the CPI(M)'s violent streak that was played up by the Opposition and cost the party the 2011 state polls. Resentment against the party snowballed with incidents of government-supported police violence against tribals in Maoist strongholds.

The rape and murder of Tapasi Malik, a Singur farmer's daughter, shook the government. And finally it was the deaths of 14 villagers in a reportedly CPI(M)-backed police firing in Nandigram that jolted voters across the state enough to throw the CPI(M) out of power and hand the state over to the Trinamool Congress.

Armed with her dramatic grassroots appeal, Mamata Banerjee used the CPM's history of political violence to dethrone it.

HS Mehtani writes in an article how the CPM used intimidation to discourage Congress candidates from contesting the polls.

"So much scare was created that Congress with great difficulty could get candidates for nomination for election due to fear of being killed, as it happened to number of their workers after filling nominations."

But now Trinamool Congress seems to be following the rule-book on violence with religious devotion.

A Times of India article published today, indicates a similar strategy being used by the TMC to beat the CPI(M) at its own game. According to the report, in the panchayat polls this year, Trinamool won 800 panchayat seats in Burdwan without any CPI(M) candidate opposing them. The constituency used to be a Left stronghold in the past. TOI reports:

Trinamool leaders and MLAs have repeatedly issued calls to violence against the CPI(M) in public meetings. Popular actor and MP Tapas Pal incited a mob asking them to thrash CPI(M) supporters and 'set them right', another leader threatened to set CPM supporter's houses on fire. Anubrata Mondal, a TMC leader even asked TMC cadres to hurl bombs at policemen if they tried defending independent candidates and the opposition party.

“If any independent candidate threatens you, uproot his house, invade his house. Don’t give vote to those independents,” said Anubrata Mondal, TMC Birbhum district president, at an election campaign meeting in Kasba village in Bolpur sub-division.

Till now more than 20 people have died in poll-related violence in West Bengal, a CPM candidate's husband has been gunned down and the party has engaged in a deafening game of mudslinging. Sunanda K Datta Ray, a senior journalist in Bengal, notes that while the political winds might have changed direction in Bengal, those indulging in violence remain the same. He said in an interview to CNN-IBN, "The irony is that many of Trinamool's hooligans today were the CPI(M)'s hooligans yesterday!"

Praful Bidwai in The News points out how violence is literally 'institutionalized' in West Bengal's political history:

Yet more violence came with President’s (Central) Rule in 1970-72, the SS Ray-led Congress government of 1972-75 - which seized power through rigging - and the emergency that followed. Egged on by Indira Gandhi, and aided by the Congress-led Chhatra Parishad students’ union, Ray severely repressed the Left, arresting, beating and killing hundreds of its activists, and crippling democratic politics. The TMC is the direct heir of the Chhatra Parishad.

There are several reasons for this entrenched legacy of violence in Bengal's politics.

One is that violence is rewarded with electoral success. The Congress government went on to rule for several years even after the Naxal massacres drew loud criticism from across the world. The CPM ruled for more than 30 years. Second is the shifting allegiances of perpetrators of violence, who often change colours with the dominant mood of the state.  The Trinamool, in a bid to strengthen its ranks, welcomed CPI(M) with open arms. Finally, the political compliance of the police in the rural areas makes it difficult to challenge or change this culture of political violence.

So the Trinamool can continue to rule rural Bengal with an iron-fist, and without any fear of consequences if Bengal's political history is anything to go by.