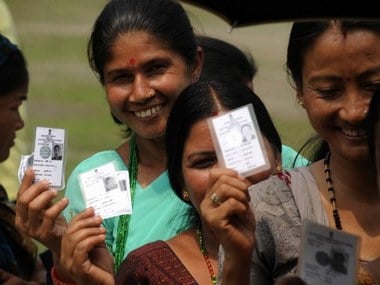 West Bengal Exit Poll 2019 Full Result: Pollsters predicted that BJP may make impressive gains in West Bengal in the Lok Sabha elections while  the Left Front may not win even one seat.

According to India Today Axis Poll prediction, TMC is expected to win 19 to 22 seats while BJP may win 19 to 23 seats.  ABP Exit Poll predicted 24 seats for TMC, 16 for BJP and two for Congress.

The C-Voter Exit Poll put TMC in the lead with 29 followed by BJP at 11 and Congress at two seats. The C-Voter numbers were similar to Republic TV-Jan Ki Baat exit poll. Both also predicted zero seats for the Left Front in West Bengal. The Time Now-VMR Exit poll also put TMC in lead with 28 seats, followed by NDA at 11 , UPA at two seats and one seat to Left Parties; Times Now-VMR was the only exit poll agency to predict any win for Left parties in the election.

Pollsters started projecting predictions and numbers at 6.30 pm, half an hour after the Election Commission started end of polling.

At a press conference, the Election Commission said that polling has concluded in 542 parliamentary constituencies across states and Union Territories. Across the seven-phased mammoth electoral exercise, a voter turnout of 67.37 percent was recorded, India Today reported. The poll panel said that a total of 7.27 crore voters took part in elections of which 3.47 crore were women and 3,377 were persons of third gender.

According to poll of polls survey, the Bharatiya Janata Party may manage to make substantial progress in Trinamool Congress bastion of West Bengal. Pollsters have predicted that the BJP will witness a massive gain of 14 seats in the 42-seat state Assembly.

With voting in West Bengal nearing its end, the question in everyone's mind is who will win how many seats in the eastern state which saw high voter turnout, as well as, heavy violence throughout the seven phases of voting.

The first such prediction of who is likely to bag how many seats, emerged with pollsters airing exit poll numbers after getting a go-ahead from the Election Commission. According to Section 126A of the Representation of the People’s Act, 1951, exit polls can only be aired until half an hour after the completion of the final phase of voting. Exit polls have not always been accurate as they are based on information shared by voters soon after they cast their votes on the assumption that they are telling the truth. However, they present some sort of picture on who's placed where ahead of the counting of votes on 23 May. Pollsters will attempt to answer questions like which state voted for whom or who will come to power or whether Narendra Modi will return as the prime minister for the second consecutive term or how well did TMC fared in these elections in comparison to challenger BJP. However, all of these analyses are only predictions and estimate how the country's electorate has voted.

West Bengal has a total of 42 Lok Sabha constituencies, and the state voted across all the seven phases of national polls. Today was the last one in nine seats. All the earlier phases have witnessed heavy violence with TMC and BJP trading blame over the issue. Large scale violence was reported on 19 May (Sunday) as well from different parliamentary constituencies of the state with Trinamool and BJP blaming each other for the violence.

While vehicles of few leaders were vandalised in poll-related violence, BJP has also accused TMC of beating its office-bearers. BJP MP candidate from Jadavpur, Anupam Hazra told ANI that the Mandal president of his party was beaten by 'goons' of TMC.

"TMC goons have beaten up a BJP Mandal president, a driver and attacked a car. We also rescued our three polling agents. TMC goons were going to carry out rigging at 52 booths. People are eager to vote for BJP but they are not allowing people to vote", he said.

Earlier while visiting polling booth number 150/137 in Jadavpur, he had also objected to women covering their faces while voting and said, "Women TMC workers with covered faces are casting proxy votes, it is difficult to establish their identity. When we raised an objection to it, they created a ruckus at the polling station."

Voters in Basirhat and Jadavpurhave alleged that TMC workers are disrupting the election process by not allowing them to vote.

A protest was held by voters outside booth number 189 in Basirhat. "We are not being allowed to vote by TMC goons. We went to Police for complaining against them, but TMC supporters stopped us midway and started beating us," a protestor said.

BJP's Lok Sabha candidate from Basirhat, Sayantan Basu was also present at the spot. "100 people were stopped from voting. We will take them to cast their vote," he said.

Party's candidate from Basirhat also alleged of the poll process being hindered by TMC workers and demanded the additional presence of Central forces.

Similarly, in Jadavpur, there were disturbances in the polling process at booth number 150 and 137.

Discontent over the poll process was not limited to BJP but CPI also complaint of high-handedness by TMC workers.

CPI candidate Pallab Sengupta on Sunday registered 142 complaints against TMC workers. In his complaint, he had asserted that TMC workers were pressurizing voters to vote for their party's candidate.

Sunday marks the end of the seven-phase polling in the country with a total of 59 parliamentary constituencies voting today. The counting of votes would take place on May 23.