The Aam Aadmi Party (AAP) stepped up its agitation against Union Finance Minister Arun Jaitley on Wednesday by staging a protest outside his Race Course Road residence in Delhi. The police then used water cannons to control the situation. 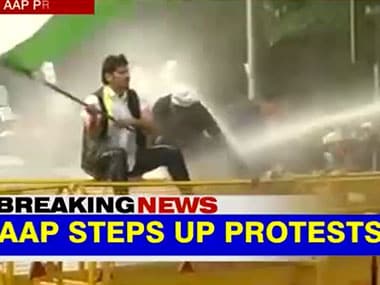 Protesters held banners and shouted slogans asking Prime Minister Narendra Modi to remove Jaitley from the cabinet, following which security was stepped up and barricades were set in order to contain the protesters.

The situation seemed to get out of hand and water cannons were deployed against the protesters. Some of them were unfazed by the water as video footage showed them climbing on the barricades and continued the sloganeering, waving the Indian flag.

The AAP versus Jaitley row has been played out over the last few days. The party has been demanding his resignation over the alleged irregularities in the Delhi and District Cricket Association (DDCA).

Jaitley on Monday filed a defamation suit against Delhi Chief Minister Arvind Kejriwal and five other AAP leaders and sought Rs 10 crore in damages for their statements regarding the DDCA's affairs. The Delhi government set up a commission of inquiry to probe alleged corruption in the cricket body.

Jaitley was accused by Kejriwal and other AAP leaders of alleged irregularities and financial bunglings in Delhi's cricket body, of which he was the president for around 13 years until 2013.