Vinod Tawde accused of irregularities in awarding contract: All you need to know about the case

In fresh trouble for the BJP government in Maharashtra, state Education Minister Vinod Tawde has been accused of irregularities in connection with awarding of a Rs 191 crore contract without inviting tenders, a charge denied by him. The contract, cleared by Tawde, was put on hold after the finance department objected to it.

The allegations against Tawde came within days of Women and Child Development Minister Pankaja Munde facing similar accusations in awarding contracts for various purchases worth Rs 206 crore on a single day in February this year without following the mandatory e-tendering process.

Here is all you need to know about the case related to Vinod Tawde. 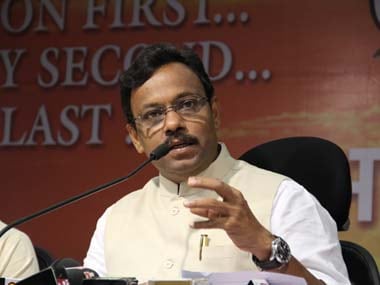 On 11 February, the education department had issued a government resolution authorising the office of the Education Director (Primary) to enter into a rate contract for supply of 62,105 fire extinguishers for Zilla Parishad schools across the state. Each fire extinguisher was to be procured at a price of Rs 8,321 and each school was to be provided three pieces, according to a PTI report.

The contract, cleared by Tawde, has, however, been put on hold after the Finance Department objected to it and sought a probe, official sources said.

PTI further stated in their report that the first-ever BJP-led government in Maharashtra has made e-tendering of contracts mandatory for all purchases above Rs 3 lakh. Quoting financial department's official note on the same issue, a report in The Indian Express said, "Official communications show that the orders were issued following Tawde’s directives dated 6 January."

According to a report in DNA, the file, in the same issue, was first moved during the rule of the Congress-NCP combine in Maharashtra. The then Education Minister Rajendra Darda was initially in favour of the proposal, Tawde told DNA.

On 27 February, after getting government's nod, Education Director (Primary) Mahavir Rane, gave the contract to Reliable Fire Engineers in Thane. According to NDTV, the finance department's approval was not taken before authorising or signing the rate contract. But after senior bureaucrats in the finance department objected and pointed to alleged irregularities in the contract, the education department stayed its earlier order on 4 March.

But by then, the contractor had already raised a bill of Rs 6.20 crore for the supply of 6,047 extinguishers, the finance department note said. Further supplies had been stopped after the department raised objections, the IE report said.

The Opposition mounted attack on Tawde even as the minister denied all the charges against him. "Not a single rupee has been paid to contractors. We stopped the order immediately after the Finance Department raised objections," Tawde was quoted as saying by PTI on Tuesday.

Even Shiv Sena, a BJP ally in Maharashtra, did not spare Tawde. Shiv Sena MP Arvind Sawant on Tuesday favoured his stepping down until proven innocent. "When such an incident had happened during Balasaheb's time, he asked for proof against his minister. When he prima facie found substance in the material given to him, he asked his minister to resign, face an inquiry and asked him to come out clean. He had categorically told his minister that he would be reinstated if he comes clean in the inquiry," Sawant told PTI.

Meanwhile, top BJP ministers in the Devendra Fadnavis-led government in Maharashtra rushed to defend Tawde, who maintained that there was no wrongdoing on his part in the alleged scam.

At a hurriedly convened press conference in Mumbai on Tuesday afternoon, Tawde was flanked by Finance Minister Sudhir Mungantiwar and Co-operatives minister Chandrakant Patil. "The Opposition is making a mountain out of mole hill," Mungantiwar said.

"Our Education department budget for the purpose is Rs 18 crore but there are allegations of a Rs 191 crore scam. I (the department) had Rs 18 crore. I could have easily purchased equipment worth that amount. If I were to comply with the SC order, I would have needed Rs 191 crore. I asked Finance Department what should I do? There was already a provision of Rs 18 crore made by earlier Congress government for purchase of fire-fighting equipment in schools. Had we wanted, we could have ordered equipment based on that provision. However, we approached the finance department, asking about providing the equipment to all the schools. That amount came to Rs 191 crore. That is what is being referred as the 'Rs 191 crore scam' despite the fact that not a single rupee has been given to anyone,"PTI quoted the Education Minister as saying.

Not a first for Tawde

This is not the first controversy for Vinod Tawde. Earlier this week, the minister was caught up in a fake degree row, after a news-channel reported that Tawde's BE electronics degree was 'bogus'. The minister had clarified and refuted the charges.