Banaskantha (Gujarat): Union minister Uma Bharti on Thursday said the Congress "benefitted" the most from the assassination of Mahatma Gandhi while the RSS suffered the most. 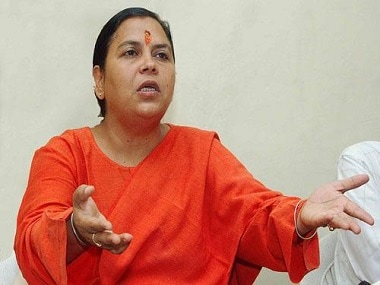 "Today I ask the people of the country and the media. Who benefited most from the assassination of Gandhiji?" Uma Bharti said in Banaskantha, Gujarat.

"We went to jail. We were banned. And we are still suffering for that till today. The country suffered a lot and the Sangh and Jana Sangh suffered a lot," she said.

She added that the Congress benefited most due to Mahatma Gandhi's killing.

"Due to the assassination, the Congress benefited most as he had announced that Congress will be disbanded and a new political wing will be formed (after independence)."

The Drinking Water and Sanitation minister's remarks came a few days after the Supreme Court appointed senior lawyer Amrender Sharan as amicus curiae to examine whether there is scope for re-investigating the assassination of Mahatma Gandhi in 1948.

Mahatma Gandhi was shot dead on 30 January, 1948 in New Delhi by Nathuram Godse.