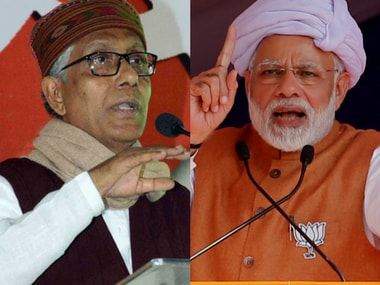 Polling began amid tight security in 59 of the total 60 seats in Tripura on Sunday. Polling in the northeastern state has gained a lot of attention with the Bharatiya Janata Party (BJP) emerging as the main challenger to the ruling Left Front, which has been in power in the state for the last 25 years.

The state has witnessed a high-voltage camping with Prime Minister Narendra Modi addressing as many as four rallies in the state.

Though voting has remained brisk since morning, development is likely to be the deciding factor as voters choose representatives among the 307 candidates in the fray. According to ANI, several voters in Udaipur said on Sunday that they want a government which can provide them with economic development.

The Tripura BJP president  Biplab Kumar Deb voted in Udiapur, while Chief Minister Manik Sarkar voted at a poll booth in Agartala. As of 12 am, the state recorded a voter turnout of 45 percent.

Meanwhile, Modi has urged youngsters in Tripura to come out in large numbers and vote after voting begins in 59 out of the 60 seats in the CPM-bastion. On the other hand, BJP chief Amit Shah tweeted, 'One vote will lay foundation of prosperous Tripura' and urged people to vote in large numbers.

Reports of EVM malfunction has come from various parts of the state. Voting is yet to begin in some of the polling stations in the state. Speaking to Firstpost, Sriram Taranikanti, the CEO of Tripura said, "There were technical glitches and we have had difficulty in about 3 percent of the total voting machines across the State. We have rectified the same and polling is going smooth."

BJP state in-charge of Tripura Sunil Deodhar says he's confident there won't be any instances of booth capturing and reposes faith in the central forces deployed across the state. However, BJP candidates have been complaining of state authorities and CPM cadres threatening voters.

The Communist Party of India-Marxist (CPM) is confident of retaining power in its bastion of Tripura in Sunday's assembly elections and achieving a turnaround in the Left movement across the country, though the Bharatiya Janata Party (BJP) is battling tooth and nail to oust the Left Front government. Sarkar, who is running for his fifth term as the chief minister, led the CPM's campaign addressing around 50 rallies in the state. Other Left leaders like Sitaram Yechury and Brinda Karat lent support to the party's campaign.

In India's 65-year-long electoral history, the country's dominant Left party, CPM, has never been in direct confrontation with the BJP. However, political developments in Tripura in 2016 and 2017 have set the stage for their first face-to-face battle as the saffron outfit has emerged as the key opposition party in this Communist-ruled northeastern state.

The Congress' campaign was somewhat subdued with party president Rahul Gandhi addressing a rally at Kailashahar in Unakoti district, about 180 kms from Agartala, on the last day of campaigning.

Altogether, 307 candidates are in the fray.

The CPM is contesting in 57 seats and while the other Left Front constituents, the RSP, Forward Bloc and CPI, in one seat each.

The BJP, which has forged an alliance with tribal outfit Indigenous Peoples Front of Tripura (IPFT) has fielded 51 candidates. IPFT will contest in the remaining nine seats.

The Congress is going it alone in Tripura this time and will contest in 59 seats. The party has not fielded any candidate for Kakrabon constituency in Gomati district.

After Tripura become a full-fledged state in January 1972 along with Meghalaya and Manipur, the CPM dominated Left Front was in power since 1978 except for 11 years (1972-1977 and 1988-1993) when the Congress and the breakaway Congress led by five chief ministers ran the state.

Voting will be held between 7 am and 4 pm on Sunday at 3,214 polling stations of which 47 would be managed by women, election office sources said.

He said that the Director General of Indo Tibetan Border Police (ITBP) RK Pachnanda has been appointed as a special observer to coordinate the security forces deployed in the state.

Three hundred companies of central armed forces have been deployed across the state along with state armed personnel and the police, he said, adding the BSF is keeping keep close vigil along the 856 km long Indo-Bangladesh border in the state.