'They did not consult us': Ahead of Conrad Sangma's oath taking, HSPDP expresses reservations about CM candidate

Shillong: National People's Party (NPP) supremo Conrad Kongkal Sangma will be sworn in as the Chief Minister of Meghalaya on Tuesday even as the Hill State People's Democratic Party (HSPDP) expressed reservation in forming the government with the BJP.

The HSPDP, which has stitched a post-poll alliance with the NPP, also objected to the lone NPP Lok Sabha member Sangma being projected as the chief minister.

But the HSPDP legislators — Renikton Lyngdoh and Samlin Malngiang — have signed the letter of support, which was handed over to Governor Ganga Prasad on Sunday projecting Sangma as their leader to lead the non-Congress government. 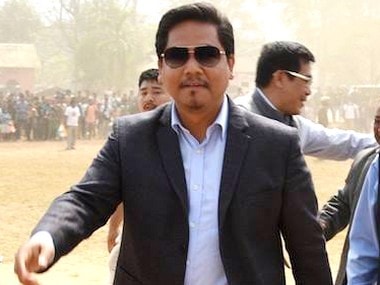 The designated chief minister, who is the non-elected member of the 60-member Assembly, will be administered the oath of office and secrecy along with his Council of Ministers. He will be the 12th Chief Minister of Meghalaya.

Sources said HSPDP's Lyngdoh will be inducted as a cabinet minister.

On Sunday, Sangma staked claim to forming the government with the support of six MLAs from UDP, four from People's Democratic Front (PDF), and two each from HSPDP and the BJP, besides one Independent MLA Samuel Sangma.

The NPP, which won 19 assembly seats in the just concluded polls, is the second largest party after the Congress winning 21 seats.

Meghalaya is the second state, after Manipur and Goa, where the Congress has not been able to forge a post-poll alliance with any of the regional parties despite emerging as the single-largest party.

Outgoing Chief Minister Mukul Sangma told journalists: "We have offered formulas to the UDP for working together — either the UDP should lead the government or share power for two-and-half years. But UDP President Donkupar Roy told me that this (formula) could have been discussed much earlier."

Asked if the Congress can still turn the tables to lead the government, he said: "You must go by history of the state and the experiences we have gone through and look at people who are there in the Congress, the NPP and others and how in a given situation especially in a football match certain players can always create a turn around....

"Congress has that kind of wherewithal to create a turnaround in any given situation, whenever needed."

Meanwhile, the HSPDP — which convened an emergent central executive committee meeting — has expressed reservation to cobble up with the BJP since its (HSPDP's) stand has always been for a non-Congress or non-BJP government.

"A pre-poll alliance was forged between the UDP and HSPDP but they (UDP) did not consult us when they proposed the name of Conrad Sangma to be the chief minister," HSPDP President Ardent Basaiawmoit told journalists.

Basaiawmoit also led a delegation of his senior party members to the residence of UDP's Roy, expressing reservation for not consulting the HSPDP leadership for partnering with the BJP and projecting the NPP president as chief minister.

"A non-Congress or non-BJP government could be formed along with the NPP," the HSPDP chief said, while detailing the numbers of non-Congress parties and three Independents.

Basaiawmoit said the chief ministerial candidate could have been also elected from among the elected legislators of the NPP.

"The NPP has been projecting the name of Prestone Tynsong as the chief ministerial candidate, but now they elected Conrad who is not an elected legislator."