The dominoes are falling: EU ends 'boycott' of Modi

Barely two months before the Gujarat Assembly elections of December, British High Commissioner James Bevan traveled to Gandhinagar to meet Chief Minister Narendra Modi. The significance of that move was that it signalled the British government's “re-engagement” with Gujarat under Modi and ended a 10-year freeze and a virtual ‘boycott’ over the 2002 riots.

It was also the first sign that Western powers in economic decline were beginning to climb down from the pedestal of the high moral ground that they had clambered onto, largely in response to the high-decibel campaign by domestic human rights constituencies to target Modi over the 2002 riots.  It also showed up the cracks in the united front that countries in the European Union had adopted on human rights considerations.

Now, those cracks have widened even further, and the entire wall of the European 'diplomatic boycot' of Modi looks set to come crashing down.

According to a report in the Indian Express, in early January, the ambassadors to India of all the countries of the European Union gathered at  German Ambassador Michael Steiner's residence to host a lunch with Modi, who had been elected barely a fortnight earlier as Chief Minister for the fourth time.

Over lunch, according to the report, and at the two-hour interaction that they had, the ambassadors evidently asked Modi some ""tough" questions about the 2002 riots, presumably about allegations that the State government was either complicit in or passive in in its response to the riots. 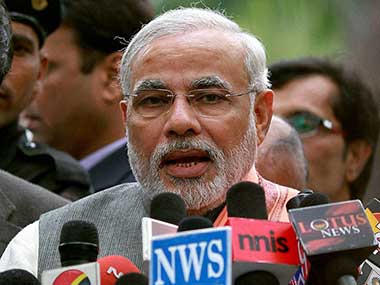 Modi, the report adds, answered them "patiently". In addition, it notes, he briefed the EU ambassadors about his model of governance, and his ideas for India.

The significance of this lunch, which has remained under wraps evidently because neither side wished to acknowledge it publicly, was that this was the first contact between envoys of the European Union countries and Modi since the riots of 2002. As the Indian Express acknowledges, it "signalled the end of the EU's diplomatic boycott of him."

Sources close to the European Union envoys are attempting to save face for themselves by noting that it was not they who had travelled to Gandhinagar to Modi - in the way that the British ambassador did in October - but Modi, who had traveled to Delhi to meet them at their invitation.

But the bottomline of the engagement, as one diplomatic source noted, is that it had become impossible to "ignore" Modi now, particularly after he had been re-elected for a third time and had established his political legitimacy - and had made it abundantly clear that he nursed ambitions of wanting to play a national role.

Late in August, Modi had hosted a Google+ hangout, at which he was asked by his ardent supporters when it would be possible for Modi to travel to the US (which has thus far steadfastly held onto the position that Modi would be unwelcome in the US). In response, Modi had said that while his supporters were dreaming that he should visit the US, he himself had another dream - that "we become so empowered that Americans queue up for visas one day."

There's still some way to go before that happens. But just the fact that the economically enfeebled European Union countries are rapidly climbing off the moral high horse that they had mounted following the 2002 riots is a sign of the times.

All this is not to say that the wheels of justice in India, which are in motion to fix the blame for the 2002 riots, will cease to spin. On Thursday, a three-judge bench of the Supreme Court gave Zakia Jafri, widow of former Congress MP Ehsaan Jafri, permission to file a fresh petition to challenge the Special Invetigation Team's recommendation for the closure of criminal proceedings against Modi. The court's decision, which sets aside a lower court ruling, is perceived as a setback to Modi, since it comes at just the time when the chorus for his appointment as the BJP's candidate for prime ministership in 2014 is growing louder.

The judicial process will go on parallelly, but the European Union envoys' formal end of the boycott of Modi after 11 years signals that in the court of international opinion at least, governments around the world are waking up to the realisation that there is little merit in continuing to ignore Modi - and much to be gained from working with him.