Hyderabad (Telangana): Telangana unit BJP chief Dr K Laxman on Sunday said that his party is open for alliance in the state with any party other than the Congress and Asaduddin Owaisiled led All India Majlis-e-Ittehadul Muslimeen (AIMIM) if the saffron party fails to win majority of seats in the recently-held state Assembly elections to form the government. 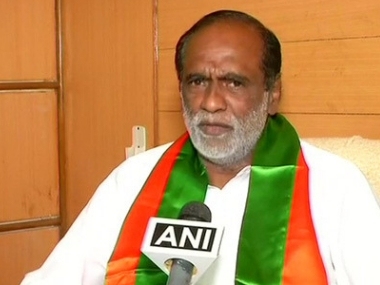 Speaking to ANI, BJP's sitting MLA said, "We in the BJP have kept our options open. We will definitely be in power. If the public did not vote us to power, then a discussion will be held on forming an alliance with the other political parties except the Congress and AIMIM. The decision will be taken in consultation with the high command after the results are announced."

Laxman further stated that "the BJP will surely be a part of the government" and added that "after looking at the mood of thousands of voters in public rallies, no other party than the BJP will sweep the state Assembly polls.

Meanwhile, Telangana Pradesh Congress Committee (TPCC) president GN Reddy did not rule out the possibility of joining hands with different political parties and stated that if the AIMIM wants to form an alliance with his political party, he is ready.

"In our country, no party is a permanent enemy or a permanent friend of another political party. We decide to form an alliance according to the situations. If the TRS goes with BJP, AIMIM can sail with us if they want to," he said.

The Telangana Legislative Assembly election was held on 7 December . The results will be announced on 11 December.