The Tamil Nadu Assembly session on Monday began on a stormy note with Opposition DMK boycotting the proceedings and demanding a floor test claiming that the ruling AIADMK was a minority government, said a media report.

The DMK has said that the AIADMK does not have required number of MLAs to be in the power, reported News18. The party has accused the state governor Banwarilal Purohit of giving ample opportunity to the government to continue to be in power despite 18 MLAs being disqualified.

The DMK which has been boycotting the customary governor’s address for the past three years, citing various issues, continued the practice this year also. Purohit made his maiden address on Monday to the state assembly even as DMK along with its allies walked out of the House.  Soon after he arrived, Purohit greeted all members of the House with a 'Vanakkam' and began his address.

Even as he began his speech, Leader of the Opposition MK Stalin was on his feet trying to raise some issues. The governor paused for a moment and told Stalin 'please ukkarunga' (please take your seat) in Tamil but to no avail. Stalin was supported by his party MLAs, who raised slogans demanding that their leader be allowed to speak.

The session also witnessed sidelined AIADMK leader TTV Dhinakaran making his debut in the Assembly after having won the 21 December Radhakrishnan Nagar bypoll by a thumping margin of 40,000 votes against E Madhusudhanan of AIADMK. 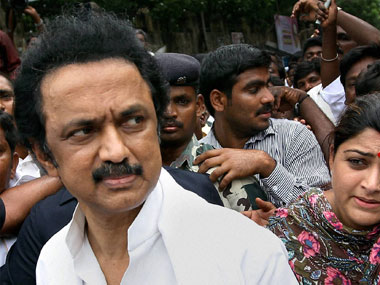 After being sworn-in as member of the Tamil Nadu Assembly, Dhinakaran had lashed out at Palaniswamy and his deputy O Panneerselvam and claimed that the government would not last beyond "three to four months."

Brushing aside his claims, Panneerselvam had said he wouldn't reply to "those who are in dreamland."

The Speaker of the Tamil Nadu Assembly, P Dhanapal, in September had disqualified 18 MLAs loyal to TTV Dhinakaran, following their withdrawal of support to Chief Minister Edappadi K Palaniswamy.

These MLAs had met the then governor Ch Vidyasagar Rao and said they had lost confidence in the chief minister, a day after the formal merger of the two factions led by Palaniswamy and then rebel leader and now deputy chief minister O Panneerselvam on 21 August.

According to a government notification, the governor had summoned the Assembly to meet on 8 January at 10 am. The duration of the session will be decided by the House's Business Advisory Committee.

The DMK and other opposition parties had earlier asked Purohit’s predecessor Rao to order a floor test for the Palaniswamy government and also approached President Ram Nath Kovind with a similar plea.