With enough ammunition at its command to put the BJP on the mat, the Congress maybe looking forward to the upcoming Parliament session with eager anticipation, but its ‘success’ hinges on the unqualified support of regional chieftains. Congress president Sonia Gandhi’s iftaar party seems to have brought the latter together despite the best efforts of the BJP floor managers to keep them apart. The ruling combine should brace for one more ‘stormy’ session.

It was believed earlier that the ruling dispensation had "extracted some assurance" from parties like the Trinamul Congress and the Samajwadi Party for smooth conduct of proceedings, especially in Rajya Sabha, but a shocker was in store for it at the recent JPC meet over the Land Bill where regional outfits united with the Congress to corner the government. 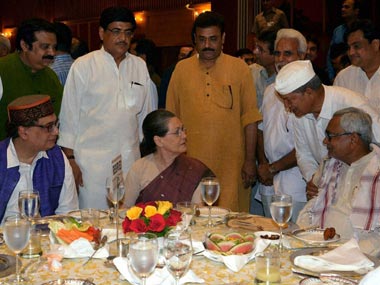 The Congress leadership is obviously delighted over the development. An insider said: “Sonia Gandhi’s iftaar party has worked its magic. It has convinced regional parties like Trinamul that they should be steadfast in their opposition to the Modi government”.

“Any direct or indirect hint that these regional and smaller parties would do business with the Modi government via-a-vis Land Bill would boomerang on them,” he told Firstpost. Among others who attended Sonia’s iftaar included Trinamool Congress MP Derek O'Brien who interacted for long with senior Congressmen Anand Sharma and Ghulam Nabi Azad. The NCP was represented by Praful Patel and Majeed Memon.

The bonhomie is sure to make the BJP jittery. The opposition attendance at Sonia’s party may have limited implication but the fact that the parties were not talking in different voices at the JPC is a sign of trouble. Its floor managers had "not left anything to chance" and reached out to regional satraps like Pawar and Mulayam Singh Yadav urging them to play down the Lalit Modi controversy in both Houses of Parliament. And if sources in the party are to believed Mulayam’s cousin Ram Gopal Yadav, Rajya Sabha floor leader for SP, had already given signal that his party would not demand Sushma’s resignation as her role to help Lalit Modi, controversial former IPL commissioner, move out of UK was only on humanitarian ground.

On this front, BJP remained assured of Trinamool 'silence' too as Mamata Banerjee's did not quite make an issue of Lalit Modi row and did not corner Sushma or Vasundhara Raje. Apparently, NCP stalwart Pawar has given indication of not raising IPL row as he too has been a cricket administrator. The BJP also expected that the opposition would go slow on the Vyapam scam in Madhya Pradesh since the case has been handed over to the CBI.

But in the JPC meet examining Modi government’s alleged ‘pro-corporate’ amendments to the high-profile Land Bill or The Right to Fair Compensation and Transparency in Land Acquisition, Rehabilitation and Resettlement Act, 2013, Sharad Pawar led the charge in attacking the government.

Pawar said while Prime Minister Narendra Modi has every right to hold a meeting of NITI Ayog but talking about land bill there “when it is being examined and debated in all-party JPC panel was not required”. Much to the embarrassment of ruling BJP members in the panel, Ram Gopal Yadav from Samajwadi Party, B Mahtab from BJD, Derek O'Brien and Kalyan Banerjee (Trinamul Congress) quickly supported him. Leaders took exception to PM’s "extra push" on the Land Bill. Finance Minister Arun Jaitley talking about the rights of the states to go for their own state-level land acquisition laws also came in for criticism by the Congress member in the JPC, Jairam Ramesh.

But the ruling side is trying to put up a brave face and not much worried about the JPC deliberations with the refrain being, the parliamentary panel is used to such “free, frank and candid talks”. “Moreover, opposition members in JPC were upset when they came to know that as many as four officials who were to appear before the committee did not turn up," one minister said.

Curiously enough, Amitabh Kanth, secretary department of Industrial Policy and Promotion wrote to the JPC chairman saying he was in Edinburgh on an official assignment. The secretaries from Legal Affairs, Legislative Department, Rural Development and Commerce Ministries, and top officials from Railways were also supposed to turn up.