Sonia, Rahul get aggressive in Parliament over LoP to Congress party's joy

Sonia Gandhi taking a plunge to demand the Leader of Opposition post for the Congress has added a new dimension to the issue.

In order to make up for the low number of seats the Congress managed to win in the election, she wants the UPA be considered as one entity, instead of separating the Congress from Sharad Pawar’s NCP that won six seats and Lalu Prasad Yada’s RJD that won four.

This logic of using pre poll alliance numbers to stake claims is certainly not a new one, and nor is it restricted only to Congress. It has been freely employed by the UPA, NDA, National Front and United Front, to form governments.

However the use of coalition numbers to seek the LoP post in particular, had so far been unprecedented. But then the 16th Lok Sabha has thrown up new dynamics. The BJP with 282 seats got a clear cut majority on its own and the Congress was reduced to 44, less than 1/10th, which as per the existing norms does not automatically allow it the post of LoP. 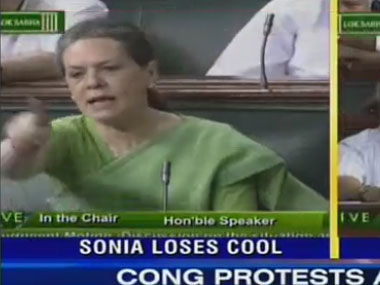 "We are the single largest (opposition) party and we have a pre-poll alliance. We are entitled to the post," Sonia told reporters in Parliament House.

Interestingly, although the Congress is building pressure, making all kinds of noises in the public and in the media, even indicating that it could seek judicial intervention on the issue, it has for reasons unknown, not filed any written letter or petitioned the Speaker on the issue.

Though the issue has been taken up through back channel informal discussions, the party has still not made the demand official by either taking it up with the Speaker or with the Modi government. Sonia for her part has also not ruled out seeking judicial recourse.

The BJP is no hurry to yield to Congress’s pressure. The ruling party leaders think that the party's sustained aggression on the issue will only cause it further embarrassments. It can continue reminding Congress of its humiliating defeat and shrunk status in Parliament.

The Speaker Sumitra Mahajan has for now virtually negated the Congress’s claim by saying that she will “not respond on issues, which appear in media reports”. She will respond only when someone, Congress or other parties approach her with the specifics.

The LoP post is equal to that of a cabinet minister. He/she will receive a designated office in Parliament House and it will be obligatory for the government to extend certain privileges to him/her as per the laid out norms. The LoP in Lok Sabha is also mandated by law to sit on the selection panel of various statutory and constitutional posts including the LokPal, CVC, NHRC and so on. But more than the right to be consulted on key appointments, it is more a matter of prestige and dignity for the Congress.

Some BJP leaders are posing a counter question to Sonia on her claim that the LoP should be given to the UPA. What if for instance (hypothetically) two or more non-Congress regional parties like the AIADMK, Trinamool, BJD join hands and stake a similar claim? Will the UPA (Congress) LoP then be changed?

The Congress may or may not succeed in getting what it desires. Despite that however, it has led to general enthusiasm in the party ranks. If mother Sonia has been assertive on LoP, son Rahul Gandhi too was in aggressive mode. As the Congress disrupted proceedings on the opening day of the Budget session of Parliament, making price rise an issue, Rahul who had so far been content sitting in back benches, walked down the aisle and joined his party MPs in the protests.

Some others members trooped to the well of the House. Rahul like the rest of his fellow Congress members did not yield to the Speaker’s pleas for restoring normalcy in the House. He stood in the aisle while the protests with slogan shouting against the Modi government continued.

Some Congress men see this as the one defining moment for the party from Rahul Gandhi’s perspective. A leader who did not agree to take up the party’s leadership position in the Parliament, is now in protest mode against the Modi government’s first regular session. Will Rahul also debate in the month long session? No one has any idea yet. He has not spoken in Parliament since his much discussed intervention during the Lokpal debate in August 2011.