After being denied a BJP ticket from Barmer, Jaswant Singh lashed out at the party and its prime ministerial candidate Narendra Modi.

"The Namo-Namo tamasha, the decision-making process (in BJP) reminds me of 1975. There is more of arrogance and less of taking everyone along," Singh told a press conference shortly after he filed four sets of nomination papers before the collector, who is also the returning officer. 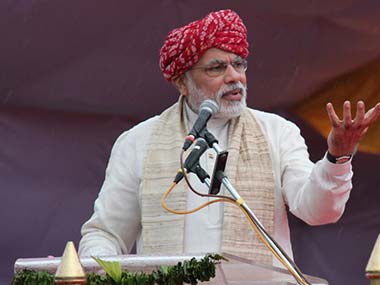 Not only Singh, but other senior leaders of the BJP too have been miffed with the changes that Modi and party president Rajnath Singh have brought about in the party. LK Advani was also denied a constituency of his choice and Murli Manohar Joshi had to vacate his constituency to make way for the Gujarat chief minister.

From posters to its official slogan - ab ki bar, Modi sarkar - it is Modi who has taken not only the centre-stage, but most of the remaining space of the stage.. This has led critics to say that BJP has become Modi-centric.

"It is that today after a long period that BJP has found a person who can lead the party after Atal Behari Vajpayee. Those who say it is individual centric, they forget that 'Ab ki baar Modi ka sarkar' is only an extension of 'ab ki baari atal behari'. What happened is that there is a dynamic shift in the BJP," said Swapan Dasugpta on CNN-IBN, during a debate.

"It is an inspired bit of poetic license. What is happening is today there is a groundswell. If we today deny that, then we will be living in a continuous process of denial. In tactical terms it is a presidential approach. Modi epitomises a certain energy. There are large sections of India that find appeal in it. He is cutting across existing political boundaries and reaching out to those who are not very enamoured by the BJP," Dasgupta said.

But the question remains if Modi's model of development and governance and handling the party is working, then why change anything?

"How is it working?" asked Aakar Patel and said, "Modi has been one of the incompetent home ministers of India. He is an insecure man. He cannot tolerate anyone who can be a Centre of power. He did the same with leaders in BJP who had built the party there. His track is to look at people who he is afraid of. Advani is one of those, he will humiliate. Those he is scared of he will boot out. Those like Sushma Swaraj, who he is afraid of, he will go after their supporters. Modi can only work with people like Jaitley who has never won an election ever or like Amit shah. He hasn't allowed a competitive leader in Gujarat and he is trying to do the same in Delhi."

Meanwhile former minister in Modi's cabinet Jaynarayan Vyas defended Modi saying, "I can only say there used to be a lot of discussion on every agenda. Even he revised his own opinion.A leader should be a dealer in hope, why is he so popular? After what the country has gone through with inflation and scams he is one leader who gives hope."

"If Modi scared away people why would other leaders in Gujarat speak against him?" Vyas asked.

However, Patel said, "I think you could express any dissent as long as it was on Modi's side. Modi held personally any portfolio of
importance. He was so insecure that his aides like Amit shah and Saurabh dalal also weren't given any portfolios."

Meanwhile Ameeben Yagnik of the Congress said, "Modi is afraid of his own leaders and those people are saying there is a nakli BJP. This is a party is being destroyed by one man and it is a one man party."

In Modi's defence Dasgupta pointed out, "You cannot have a presidential election unless you have a formidable grassroot organisation. He has united all and gotten outside support. He may be the captain of the team but there is a team."

Criticising even the Congress, Patel said, "The Congress is a tyranny. Modi has made the BJP a tyranny in Gujarat and he will do the same in Delhi. Why did Keshubhai leave the party? It is not a BJP party, it is a Modi party."