Should I urinate to fill up empty dams? asks Ajit Pawar, apologises later

Mumbai: "If there is no water in the dam... Should we urinate into it?," asked Maharashtra Deputy Chief Minister Ajit Pawar in an insensitive comment that kicked up a controversy for mocking farmers reeling under severe drought.

The NCP leader followed up this comment laced with crass humour with another remark poking fun at load-shedding in the state stating, "I have noticed that more children are being born since the lights go off at night. There is no other work left then." The remarks were greeted with laughter from the audience.

The nephew of Union Agriculture Minister Sharad Pawar later apologised for his remarks made while addressing a public meeting at an interior village in Indapur tehsil of Pune district last night. 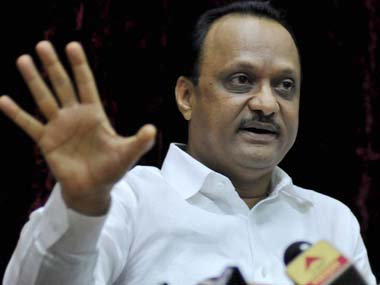 "My comments made at a meeting at Indapur were not aimed at drought-affected people. I apologise if I have hurt the sentiments of the people in the state," he said in a statement today.

Referring to the hunger strike by a drought-affected farmer at Mumbai's Azad Maidan, Pawar had said "He has been on fast for the last 55 days. (But)If there is no water in the dam, how can we release it? Should we urinate into it? If there is no water to drink, even urinating is not possible."

Bhaiyya Deshmukh, the farmer from Solapur district who has been on fast, said Pawar had hurt the sentiments of the people with his comments and that it was unbecoming of the Deputy Chief Minister.

Pawar said that he was apologising as he did not want his comments to affect drought relief measures. "I am committed to ensure that drought hit citizens get water, cattle fodder, waiver of students fees and would continue to strive to extend all help to the people in distress," he said.

Uddhav Thackeray said Ajit Pawar was mocking the farmers' plight and noted that NCP chief Sharad Pawar highlights his farming background while his nephew was insulting the farmers.