Shiv Sena demands seat sharing with BJP like in 1995: Is this a viable route for Amit Shah's party ahead of LS polls?

The Shiv Sena, reports say, has demanded that the Bharatiya Janata Party share seats with it according to the formula the two parties followed over two decades ago, in 1995. In that year, the Sena had contested 171 seats — 60 percent of the total 288 — while the BJP contested 117 seats. Times have changed. Now the BJP has 122 seats in the Maharashtra Assembly and the support of 16 other MLAs, making the Sena's demand an outrageous one that the ruling party is unlikely to bend to.

BJP president Amit Shah had on Monday reportedly called Sena chief Uddhav Thackeray to finalise a seat-sharing agreement before the Lok Sabha polls. The BJP had reportedly offered Shiv Sena a 50-50 seat-sharing formula with an additional Rajya Sabha seat. But the Sena did not agree to it.

What the numbers say

In 1995, the combined forces of the BJP and Sena had secured a total of 138 seats — the Sena, 73, and the BJP, 65 — and formed their first coalition government in the state, headed by Manohar Joshi of the Sena and supported by Independents and others. The Sena contested almost 60 percent of the seats while the BJP settled for 40 percent. 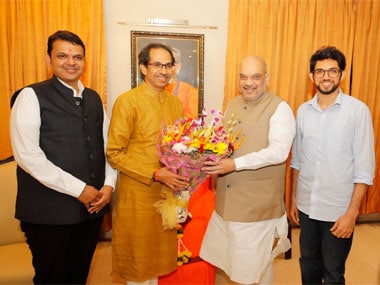 Since then, there have been four elections to the Maharashtra Assembly. In the 1999 polls, the Sena-BJP alliance won 125 out of 288 and lost to the Congress-National Congress Party alliance, which won 133.

In 2009, the BJP won 46 and the Sena won only 45, losing to the Congress and NCP's Democratic Front once again.

From 73 to 45, the Sena saw a slow slide of its seat numbers during the time when it was an ally of the BJP, which led to its relationship with the party growing increasingly fraught as the time came for the 2014 election.

Of the 288 seats in 2014, which the Sena and BJP had contested all 288 seats separately, the BJP won 122 and the Sena won 63. The BJP's Devendra Fadnavis became chief minister. Numerically, the BJP has little reason to agree to the 60-40 model, with its clear 42 percent majority now.

The Sena has also been stressing that it will also claim the post of the chief minister once the alliance comes to power. The demand for a Sena chief minister is notwithstanding the number of seats the party eventually manages to win.

While the Sena may ultimately settle for 50 percent of the seats, it remains in a perennially taut understanding with the BJP. Within this understanding, the Sena is the natural big brother who, it is almost a given, will impose situations and make extravagant demands off the BJP. While the two parties unite on public stages, like at the rituals preceding the start of construction on the Bal Thackeray memorial in Mumbai which saw Uddhav Thackeray and Devendra Fadnavis shake hands, the Sena's editorial columns on its mouthpiece Saamana are almost exclusively devoted to slamming the BJP and its government at the Centre over its inability on several counts. Issues on which the Sena has recently criticised the BJP range from the party's delay in constructing a Ram temple to the worsening law and order situation in Jammu and Kashmir and from BJP's censure of former JNU Students Union president Kanhaiya Kumar to even the Rafale row.

The Sena has never been one to maintain equanimity in the face of disagreements. So while Shah might have made the call to Uddhav as we was keen on stitching a deal ahead of the Lok Sabha polls, the Sena chief may have been determined to negotiate for a package that involves both, reported The Indian Express. While Shiv Sena has contested in states as far away from Maharashtra as Odisha, it has never enjoyed even a fraction of its popularity and electoral success in any other state, leading it to naturally train its entire focus on Maharashtra.

Interestingly, a political expert told Times of India that the Sena had, a year ago, passed a resolution in its national executive committee meeting saying it would go solo in all polls in the future. The party, which has not made any announcement adhering to its stand, may just be hoping to fight the polls alone. A protracted snub by the BJP may be just what the Sena is hoping for to fire its workers into a poll frenzy and garner the support of its core electorate in Maharashtra.

Why would the BJP agree to the Sena's demand?

Sena leader Sanjay Raut told The Times of India, "They (BJP) can rule in New Delhi, it will be the Sena that will call the shots in Maharashtra." Herein, lies the BJP's only reason to consider the party's demands.

Maharashtra is a key state for the BJP in its campaign for re-election in 2019, notes a blog post by TK Arun on The Economic Times. While south India remains an area of darkness for the BJP, BS Yeddyurappa's audiotaped lure of the Janata Dal (Secular) MLA has not been paying the party dividends. Meanwhile, the North East remains in turmoil over the Citizenship (Amendment) Bill which was brought to the Parliament by the BJP. In several states to the north and northwestern parts of the country, the BJP has either lost recent Assembly elections or is on shaky ground in spite of being in charge of state governments.

While the Sena's price is indeed too high, one in the BJP's position would well be willing to pay it to retain control of an integral state that can guarantee it 48 seats in the upcoming 2019 Lok Sabha election.