Jaipur: The video session with Salman Rushdie that was scheduled to take plae at 3.45pm on Tuesday has been cancelled. Reports say that the conference was cancelled by the owners of Diggi Palace, the venue of the Literary festival after a group of protesters entered the venue  and started praying there as a mark of opposition to the video conference. The Rajasthan police had said that the video conference would cause a law and order problem.

Earlier the director of the festival received a death threat, and there are unconfirmed reports that the session has been postponed. 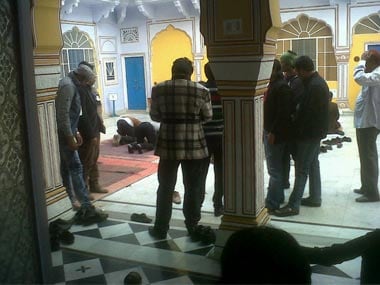 A death threat was received against festival director William Dalrymple ahead of Rushdie's speech, a senior police officer told Reuters on condition of anonymity.

Dalrymple declined to comment and no further details of the threat were available.

The Jaipur Literature Festival's invitation to Rushdie, whose 1988 novel "The Satanic Verses" is banned in India, sparked protests from some Muslim groups, who said he had offended their religious sentiments.

Rushdie will speak to the festival at 3.45 p.m. local time (5:15 a.m. ET), organizers said, after a receiving the go-ahead from the government of Rajasthan state, of which Jaipur is the capital.

"We received information from the Rajasthani government that no permission was required to proceed with this," producer Sanjoy Roy told reporters, adding that the festival would act if any laws were broken during the speech.

"We hope that his conversation will take place peacefully."

Political parties are seen as unwilling to lend their support to the author for fear of offending Muslim voters ahead of an important state election in Uttar Pradesh, India's most populous state, next month.

A spokesperson for the Chief Minister of Rajasthan told Reuters on Tuesday morning that the government had yet to take a final decision on allowing the speech to proceed.

Five authors have been investigated by police in Jaipur for reading from "The Satanic Verses" at the festival, and English PEN, a writer's body, issued a statement late on Monday in their support.

"We felt that it was important to show support for Salman, who is often misrepresented... This situation has arisen in India at a time when free speech is under attack," wrote Hari Kunzru, one of the authors involved, in the Guardian newspaper.

The five-day festival, which concludes on Tuesday, has attracted over 70,000 visitors and featured best-selling authors such as Richard Dawkins, Tom Stoppard and Michael Ondaatje, and global television superstar Oprah Winfrey.