Tamil Nadu chief minister J Jayalalithaa doesn’t visit Delhi often; but when she did it for a day on Monday, she literally became the cynosure of all eyes.

Her presence was immense in terms of her images as well as her high voltage sound-bites.

First, there was this fleeting smile and photo op with arch rival and union home minister P Chidambaram, for whom she had shown nothing but absolute disregard during the last two decades. Then, there was her anti-Congress tirade for usurping the rights of the states through bills and notifications. 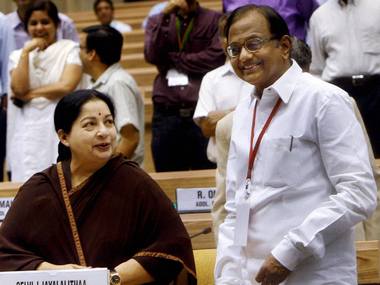 Jayalalithaa is one of the few chief ministers in India who has been extremely protective of the autonomy of the states. PTI

In the end, it was neither the NCTC nor Chidambaram that got the eyeballs, but Jayalalithaa and the non-UPA resistance that she led from the front. The otherwise vocal Narendra Modi and Nitish Kumar either deliberately underplayed themselves or were shadowed by Jaya’s stately presence.

Jayalalithaa is one of the few chief ministers in India who has been extremely protective of the autonomy of the states right from her first ever tenure in 1991. In the past she had raised her voice on every occasion when the centre appeared to infringe on the rights of the states.

In the process, she has coined the phrase that the centre has reduced the states to “glorified municipal commissions,” an analogy that she had first used in her speech at the National Development Council (NDC) last year. Today it has become the catchphrase that galvanises the support of other chief ministers. And she repeated it again at the chief ministers’ meeting on NCTC on Monday.

Building upon her earlier interventions at national forums such as NDC or the National Integration Council (NIC), mostly delivered by her ministers, she made her point very clear that she would not allow an NCTC in the present form, how much ever Chidambaram tries to create the urgency to fight terror, because it contravenes the constitutional provision of priority for police in the state list.

Chidambaram received a additional blow when she said that the lack of consultation with the state governments and the failure of the centre in taking the states into confidence is a cogent commentary on the system of governance at the centre.

She had made her displeasure on the NCTC amply clear in her letter to the Prime Minister earlier this year when she said, the move smacked of a tendency to abrogate power with no attendant responsibility. The power of the IB officials in the proposed NCTC to arrest and seize is “highly objectionable and can be misused,” she had said. “Setting up of inter-state intelligence teams is tantamount to usurping legitimate rights of the states.”

Jayalalithaa’s speech against the contraventions of the centre on NCTC went beyond terror and exposed the fundamental flaw in the centre-state  relationship under the present regime.

The Congress at the centre, whether it is a non-political Manmohan Singh or a political Chidambaram, still haven’t come to terms with the increasing sense of autonomy, largely fostered by the electoral confidence in their respective terrains, that the non-UPA chief ministers exercise.

On NCTC, despite a believable or perhaps a genuine cause, they are not falling in line purely because of this attitude. Policing is the bread and butter of the state and nobody would like even a harmless dilution. This anti-centre block of chief ministers that she leads now has tremendous value for the upcoming Presidential elections. PTI

Throughout her career as the chief minister, Jaya opposed every bill, policy statement, or notification of the centre that seemed to overlap or usurp the policies or powers of the states.

The Goods and Services Tax (GST), planning commission’s approach paper on poverty, FDI in retail, Prevention of Communal and Targetted Violence (PCTC) Bill, Right to Food Act, the centre’s stand on Tamil Nadu fishermen and Sri Lanka, Accelerated Irrigation Benefit Programme, common entrance test for professional courses and so on, And most recently, the non-payment of the state’s share of central sales tax and her “vehement opposition” to the National Commission for Human Resources for Health Bill.

This anti-centre block of chief ministers that she leads now has tremendous value for the upcoming Presidential elections and the 2014 parliament elections. The mutual admiration that she shares with Narendra Modi, and their axis is an open secret that points towards a certain electoral alliance with BJP.

Most of the non-UPA chief ministers, including possible fence sitters such as Naveen Patnaik, are gravitating towards this axis.

In the coming days, the once rare national appearances of Jayalalithaa might become more frequent. And as her followers believe, she is all set to play a decisive role in the formation of the next government.