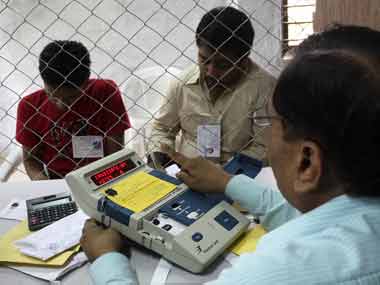 1 Feb, 2018 | 3.57 pm: Rajasthan BJP chief Ashok Parnami, in a press conference, acknowledged defeat as he said that his party respect's people's mandate.  "We will work harder and form government in 2019,” he said.

1 Feb, 2018 | 3.20 pm: As the election trends are becoming clearer, the news point of the day is that the BJP is looking at a defeat in all five seats across the two states. Congress has bagged three Rajasthan seats previously held by BJP while TMC is set to win two seats in West Bengal.

Going by the initial trends, Congress is leading in the two Parliamentary seats of Ajmer and Alwar and also the Mandalgarh Assembly seat in Rajasthan.

This is turning out to be a massive blow for the Vasundhara Raje-led BJP government in Rajasthan that is headed for Assembly elections in a few months.

Meanwhile in Bengal, the Trinamool Congress surged ahead of its rivals in both the Noapara assembly seat and Uluberia Parliamentary seat and has now won Noapara by a huge margin.

Former Rajasthan Ashok Gehlot said, "This bypoll is a vote against BJP's divisive politics. Apart from changing names of Congress-era schemes, Vasundhara Raje government hasn't done anything the past 4 years. Unemployment is hurting the youth. Today's trends can be seen as precursor to not just state Assembly polls later this year but also next Lok Sabha polls."

It is a popularity test for chief minister Vasundhara Raje this bypolls. The BJP has been in power in the state since 2013 and in the 2014 Lok Sabha election had won all 25 seats.

The Congress, led by state chief Sachin Pilot, campaigned aggressively for the bye-elections. It's a prestige battle for Pilot, who was the Ajmer member of Parliament before he lost the seat to the BJP as a Modi wave swept the state.

As Congress gained a massive lead in Ajmer and Alwar districts of the state, Pilot said, "Initial trends from Rajasthan are a mandate against the government, I hope our leads will increase even more. Vasundhara ji and her government have been totally rejected by people."

In Bengal, the fight for both the Lok Sabha and Assembly seat is expected to be a straight contest between the ruling Trinamool Congress and BJP, which has been struggling to find a foothold in Mamata’s bastion.

In Rajasthan, the bypolls are not only a test for Chief Minister Raje, but also for Rajasthan Congress chief Sachin Pilot, who has been campaigning aggressively in Alwar and Ajmer.

It is being termed as a ‘semi-final’ ahead of the all-crucial Rajasthan Assembly polls scheduled for the second half of 2018. These seats went to polls on January 29 and counting is expected to start shortly.

Counting of votes for the Rajasthan bypolls in two Lok Sabha and one Assembly constituency, a crucial contest ahead of the Assembly elections due later this year, will take place on Thursday.

The counting of votes of the Alwar and Ajmer Lok Sabha seats will be done in the respective constituencies, whereas it will take place in Bhilwara for the Mandalgarh Assembly seat, a spokesperson of the state election department said.

A total of 42 candidates are in the fray for the bypolls to the three seats, the election to which was held on Monday. Voting in bypolls for Ajmer and Alwar Lok Sabha constituencies and Mandalgarh Assembly seat in Rajasthan was held on Monday, recording polling percentages of 65 percent, 62 percent and 80 percent respectively.

In Mandalgarh, BJP's Shakti Singh Hada and Congress's Vivek Dhakad are poised for a tough fight.

On Monday, a technical error in an Electronic Voting Machine in Kekadi village was reported, due to which voting was stopped for some time. In Keladi's Manda, villagers boycotted polling to protest inadequate water supply. They also rued that their village roads were in bad condition. Dense fog in Alwar resulted in a low turnout in the first hour after the beginning of polling, but voting picked up after 9.30 am. Voting percentage witnessed further increase afternoon in all three constituencies as voters in large numbers came out to votes.

The bypolls on all the three seats were necessitated after the sudden death of BJP MPs Sanwarlal Jat from Ajmer, Mahant Chand Nath Yogi from Alwar, and MLA Kirti Kumari from Mandalgarh.