Congress president Sonia Gandhi is reportedly miffed with Rajasthan chief minister Ashok Gehlot over the rebellion. The frontrunner for the Congress chief's post, he is now out of the race. PTI

A rebellion of 90 MLAs in Rajasthan has backfired for Chief Minister Ashok Gehlot and has not gone down well with the Gandhis.

The Congress leadership is reportedly upset with the veteran leader, who was a top runner for the party chief’s post, for plotting a revolt that has left it red-faced in the middle of Rahul Gandhi’s “Bharat Jodo Yatra”. Gehlot refused to give up the chief minister’s post even as he readied himself for the role at the national level.

Rahul Gandhi had insisted that Congress would abide by the “one person, one post” rule that was adopted earlier this year as the party looks to bring in reforms. According to media reports, Gehlot had agreed to step down from the CM’s post but later had a change of heart. Ninety MLAs from his camp submitted their resignation to Speaker CP Joshi to protest against a possible move of Gehlot’s rival Sachin Pilot being made CM.

The turn of events since has not been in favour of the 71-year-old leader. So what happens from hereon? We take a look.

After the rebellion, sources in Congress said that Gehlot is out of the Congress chief’s race. Sonia Gandhi is furious about the rebellion in Rajasthan and has asked for a written report on the turn of events in Jaipur.

A large number of Gehlot loyalists skipped the meeting of the Congress Legislature Party to discuss his replacement for the CM’s post. Instead, they held a parallel meeting and submitted their resignations to the Speaker.

Gehlot has been a trusted aide of the Gandhis and has played a troubleshooter during the Punjab crisis that ended with the resignation of Amarinder Singh or the G-23, the group of Congress rebels. His defiance left Sonia Gandhi seething and she expressed her displeasure by asking, “How could he do this?”, reports CNN-News18.

According to party sources, the Congress leadership is not keen that Gehlot should run for the post of the party president anymore.

Sonia Gandhi is considering taking some action against the MLAs from the Gehlot camp. A show cause notice is likely to be issued to those who organised a parallel meeting. However, the party is being cautious about its next move, keeping in mind the pushback and the support of MLAs that the Gehlot camp enjoys, according to a report in The Indian Express. Ashok Gehlot said that he did not have a role to play in the rebellion, a claim that the Congress leadership refuses to buy. AFP

What is Gehlot saying?

Gehlot has been apologetic since Sunday’s late-night rebellion by MLAs who are loyal to him. When he went to the hotel in Jaipur where Ajay Maken, AICC general secretary in charge of Rajasthan, and Mallikarjun Kharge, AICC observer, were staying, the former did not meet the CM.

Kharge, however, met Gehlot who reportedly apologised to him. He said that the parallel meeting of the MLAs and the rebellion was a “mistake” and “it should not have happened”. He also claimed that he had nothing to do with it, reports NDTV.

What’s the mood at the Gehlot camp?

Supporters of Gehlot did not seem nervous despite the rebellion. “We believe that we haven’t done anything that amounts to indiscipline and there can be no doubt over our dedication towards the party and high command,” Congress chief whip and Cabinet minister Mahesh Joshi told the media on Monday.

He said that the Congress MLAs told Maken and Kharge that nobody who rebelled in 2020 should be made CM, referring to Sachin Pilot’s 40-day rebellion. Ashok Gehlot and Sachin Pilot have been at loggerheads for a while. The former’s loyalists rebelled against Pilot’s possible elevation to the post of CM. PTI

Gehlot’s trusted aide Shanti Kumar Dhariwal, who had hosted the 90-odd MLAs at his residence on Sunday, said that the resignation was a result of “resentment and anger”. He also said that there was a “deep conspiracy” to remove Gehlot from his post.

“I accuse the Secretary-General in charge of Rajasthan {Maken} of being biased,” Dhariwal told NDTV. “He is canvassing for {Sachin} Pilot and wants to make him the chief minister.”

What’s in store for Pilot?

Pilot is in touch with Rajasthan MLAs apart from those supporting him, sources told News18. He has decided to remain silent and told his party workers to wait for the party high command’s decision. He has also told the party leadership that if Gehlot steps down as CM, then he will be responsible for getting the support of the MLAs.

Those in his faction have also refrained from talking to the media and hoping that he becomes CM. 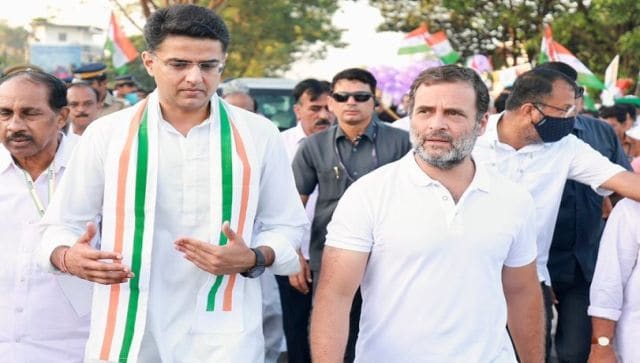 Those in the Sachin Pilot camp hope that he is elevated to the post of CM. Image courtesy: @INCUttarPradesh/Twitter

Maken and Kharge met Sonia Gandhi at her residence in New Delhi on Monday after accessing the situation in Rajasthan. According to sources, Kharge believed that despite Gehlot’s claims of non-involvement, such a rebellion could not have happened without his consent, reports NDTV.

Miffed with the Rajasthan veteran, the Congress party is already looking for other leaders who could run for the president’s post.

The names doing the rounds include old-timers Digvijaya Singh, Kharge, and Mukul Wasnik. Sashi Tharoor was among the first leaders who threw his hat in the ring.

Congress sources said that it is likely that Kumari Selja could be considered for the top post while Rahul Gandhi’s choice is said to be KC Venugopal, IANS reported quoting sources.

There was also speculation that former Madhya Pradesh chief minister Kamal Nath would contest the Congress presidential election after he met Sonia Gandhi. However, speaking to the media, he said he was not interested.

“I have no interest in the Congress president post, I have come to Delhi for Navratri,” news agency ANI quoted him as saying.

Nath is also expected to play mediator and help the party defuse the ongoing crisis in Rajasthan.

No disciplinary action is expected against Gehlot right now and he is likely to continue as CM for now. The decision on the Rajasthan CM’s post will be taken after the Congress presidential elections. The polls will be held on 17 October and the results will be declared on 19 October.