Rahul Gandhi’s recent interview on Times Now has received an unprecedented number and range of responses. It seems Twitter messages and video downloads broke several records. It is broadly agreed that Mr. Gandhi stuck to five premeditated themes – “women empowerment”, “improving the system”, “changing candidate selection process”, “involving youth in the Congress party”, and the one that he cited most – over a dozen times - was the “RTI Act” – as the Congress’ contribution, along with the Lokpal Bill, as effective instruments to fight corruption and expose scams. Regardless of the questions, Mr Gandhi kept with these themes.

His attempt to use RTI as a shield against corruption is understandable since the main blot on the Congress during UPA-II has been corruption. Sadly, Mr Gandhi’s claim that large number of scams were exposed due to the RTI, fails the test of scrutiny. 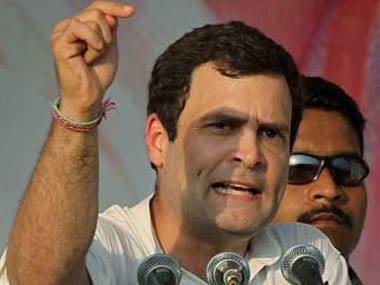 Even countries such as Botswana, Bhutan, Rwanda, Senegal, and Mongolia fare better. Post the RTI Act 2005, corruption has become much worse in the eyes of a global expert organization on corruption, which is both neutral and credible.

The claim by Mr Gandhi that big scams have been uncovered because of the RTI again falls flat when tested against hard facts. India’s biggest scams which have sullied India’s reputation across the world have neither been stopped nor stand exposed due to the RTI.

The 2G scam was uncovered for the most part by the Times of India which was reporting the nefarious designs of Mr A Raja and the companies involved since October 2007, nearly three months before the scam was perpetrated on January 10, 2008. Later, through 2008, several newspapers and TV channels continued to report on the scam. It finally blew up when CAG released its report in November 2010 (loss of Rs. 1,76,000), followed by Raja’s resignation and arrest, and eventually Supreme Court cancelling licenses on February 2, 2012.

In fact, 2G-related RTI applications were blocked by the Telecom Ministry immediately after the FIR was filed in October 2009, by seeking exemption under Section 8(1)(h) of the RTI Act. Later when the JPC on 2G was announced, the 2G-related RTI applications were blocked even in Finance Ministry and PMO, by citing further exemptions under Section 8(1)(c) relating to breach of parliamentary privilege.

The results were no different for "Coalgate". The Coalgate scam was uncovered by the CAG’s report of March 2012 (Loss of Rs.185,591). Nothing was exposed through RTI applications. Same for the CWG scam, which was broken by Times Now in 2010, and confirmed by former CAG VK Shunglu, leading to the arrest of Mr Kalmadi in April 2011, under Prevention of Corruption Act. The Adarsh Housing scam is perhaps the only one where some information came out through RTI applications, but even there, the fear of RTI did not prevent corrupt politicians from duping war widows.

A simple evaluation of the Central Information Commission (CIC) annual report 2011-12, shows that the Act is collapsing under its own weight. Data shows that opening balance of applications for the year 2011-12, is up to 4,30,425 from a mere 23,926 in 2007-08. This makes the RTI slow and thereby ineffective, prompting CIC’s self-critique, that the pendency is “very high in view of past trend of opening balances. This aspect requires to be investigated for immediate corrective action after identifying the reason(s)”.

The report admits “that 35% of times rejected RTI applications fall in ‘others’ category”, forcing the CIC to state “This calls for scrutiny and introspection by Public Authorities to ascertain the reason(s) for rejecting requests for information on this ground instead of judiciously applying provisions of sections 8(1), 9, 11 and 24”.

In fact the modus operandi in the bureaucracy for defeating all but sensitive RTI applications is simple. The Public Information Officer (PIO) ensures a frivolous reason to reject an RTI application including by using ‘others’ as a reason. In most cases the PIO’s boss, usually a Joint Secretary, who is the “appellate authority”, already has visibility to this rejection. The appellate authority then justifies the rejection taking full 30 days. This delays the information by two months already. Then the appeals process under Section 19 which constitutes multiple hearings, especially in sensitive cases, can easily delay the outcome between 8-18 months. By then, the value of the information for a journalist or RTI activist uncovering a scam becomes useless. Meanwhile, there is no penalty on officers using frivolous reasons to reject RTIs, and thus encouraging the system to institutionalise the delay tactics into a fine bureaucratic art. Even if the Commission directs that the information be given, the government simply appeals the matter all the way to Supreme Court, making the Act nearly infructuous.

In effect, there is a well-rehearsed regime ready with the politicians and bureaucrats, between the use of “post-its” which give political directions on sensitive issues without placing RTI traceable comments on the file and the institutionalised process of delays, coupled with CIC’s backlog, has completely blunted RTI’s anti-corruption abilities.

Without question, RTI is an important step in allowing citizens access to information. It enhances their rights and promotes “transparency and accountability in the working” of public authorities, at some minimum levels. But to pitch it as the most strategic anti-corruption legislation and to project it as the harbinger of uncovering scams is letting hype get ahead of reality, a normal behavior come election time! But as the old adage goes “never overpitch your case”.