The Congress on Saturday continued its attack on Prime Minister Narendra Modi and Union minister Nirmala Sitharaman over the Rafale deal and accused the Modi government of causing a loss of Rs 41,000 crore to the public exchequer by purchasing the 36 Rafale aircraft with the same configuration at thrice the price. 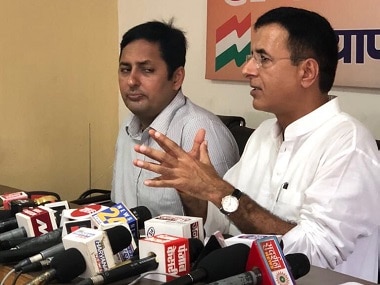 He alleged that the Rafale aircraft being purchased earlier (during the UPA rule) and the one being purchased now (by the Modi government), including its associated systems and weapons, is the same which was tested and approved by the IAF during the UPA-Congress rule. The Congress leader referred to a joint statement from April 2015 issued by the then French president Francois Hollande and Modi.

The statement read, "aircraft and associated systems and weapons would be delivered on the same configuration as had been tested and approved by Indian Air Force".

Surjewala posed a series of questions to the Centre. He asked the reason for the extra payment of Rs 41,000 crore (increasing the cost per from from Rs 526 to Rs 1,670 crore per aircraft) if the 'India Specific Enhancements' are the same as decided by the IAF during the UPA rule.

He also questioned why Modi unilaterally reduced the number of aircraft from 126 to 36 without seeking any advice from the IAF.

India specific enhancements in NDA Deal are the same as the UPA Deal – Yet PM & Defence Minister lie on enhancement of cost per aircraft from ₹526 Cr to ₹1,670 Cr!!

Congress spokesperson Priyanka Chaturvedi had previously posed similar questions to the Modi government asking why it inked a deal with France's Dassault Aviation to buy just 36 aircraft when 126 fighter jets were required.

Chaturvedi also asked if there's any urgency, why did the government not ask the French company to supply all the aircraft in one go. "The first lot of the aircraft will be supplied in 2019 and the rest in 2022. If there is any urgency, the whole lot should have been supplied by 2019," she had said.

Congress has also demanded a public debate and a detailed inquiry into the "secretive" happenings. Party leader P Chidambaram had also alleged that the price for the aircraft had gone up more than three times under the BJP-led NDA regime than what was agreed to by the erstwhile UPA government.