"There may be attempts on Parrikar's life from those who want that the actual details of Rafale deal shouldn't come out in the public domain as corruption in the deal will be proved," writes Chodankar in the letter.

The letter of the GPCC chief comes in the wake of a recent audio clip, which was played by Congress spokesperson Randeep Surjewala outside Parliament in New Delhi, wherein Goa health minister Vishwajit Rane was heard saying that Parrikar had an entire file of the Rafale jet deal in his bedroom and is using these files to hold on to his chair in spite of his poor health condition. 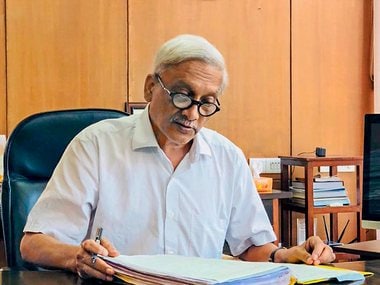 It is worth mentioning that Parrikar served as India's defence minister when the Rafale deal was signed with French defence manufacturing giant Dassault Aviation.

Later, Chief Minister Parrikar took to Twitter to dismiss the claims made in the audio clip. "The audio clip released by the Congress party is a desperate attempt to fabricate facts after their lies were exposed by the recent Supreme Court verdict on the Rafale deal. No such discussion ever came up during the cabinet or any other meeting," he tweeted.

Health minister Rane also hit back at the Congress, asserting that the audio tape was doctored and Parrikar made no mention about the Rafale deal and its documents.

"The audio tape is doctored. Congress has stooped to such a low level to doctor a tape to create miscommunication between the cabinet and the chief minister. Chief Minister Parrikar has never made any reference to Rafale or any documents. I have asked him for a criminal investigation into the matter," Rane told reporters in Panaji.

The Supreme Court on 14 December last year had dismissed all petitions seeking a court-monitored probe into the Rafale deal with France, saying that there was no occasion to doubt the decision-making process in the deal. The top court had said it was not its job to go into the issue of pricing.

The bench, headed by Chief Justice of India (CJI) Ranjan Gogoi, said that there was no need to conduct an investigation into the details of Rafale pricing.

The Rafale jet deal controversy has been on the boil over the last few months. The Congress and other Opposition parties have been alleging irregularities in the high-profile deal.