RK Puram Assembly Election 2020: Priyanka Singh is the Congress candidate from the upscale RK Puram constituency. She is contesting against current MLA of AAP, Pramila Tokas and Anil Kumar Sharma of BJP who is also a former MLA.

A newcomer to electoral politics, Priyanka has been active in politics since 2008 and has served as the vice president of the Delhi Mahila Congress. She is the daughter of former Delhi Assembly speaker Yoganand Shastri. 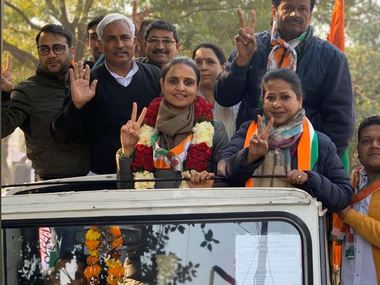 Last month, Shastri quit the Congress party over differences with party's state president Subhash Chopra. Priyanka was nominated for her first election the day her father quit the party.

Struggling with the 'dynast' tag, Priyanka is lumbering hard to shed the tag. "Firstly, I don’t agree with the term ‘dynast’. It’s derogatory and demeaning. In democracy, the most basic unit is an individual. Our Constitution has given equal rights to every individual including the right to choose any profession. Anybody in India can be a political activist if he/ she wants to. Just because I happen to be born into a political family, why should I be deprived of that right or be demeaned if I happen to choose it?," Priyanka told The Quint. She is hoping to convince voter of her candidature by campaigning on basic issues like sanitation, safety, potable water, better roads, and a safe and secure environment in the primarily residential locality.

The RK Puram constituency has been a Congress strong-hold since 1993, with the BJP winning it only twice. It is considered an affluent locality with a significant Rajput and trader population. OBCs also form 10 to 15 percent of the electorate after the 2008 delimitation. Voters belonging to the Purvanchal region and Uttarakhand are found in significant numbers in the constituency.

Like other Congress leaders, Priyanka has also taken a stand against the Citizenship Amendment Act, calling any implementation of NRC or CAA outside Assam as unconstitutional move.