Petty politics over Karunanidhi’s burial site lacks honour for the dead, may cost AIADMK and NDA dear in 2019

"I have respect for the dead, I have respect for all the dead," said Italian mobster Salvatore Riina Junior in a controversial 2016 interview. He said this when he was asked about a couple of men whom the dreadful Sicilian mafia had killed.

The conspiracies that Tamil Nadu's DMK and AIADMK hatch against each other are packed with all the cruelty of the tit-for-tat, eye-for-eye, tooth-for-tooth vendetta that Cosa Nostra is notorious for — but without the mobsters' honour for the departed souls. If Tamil Nadu chief minister E Palaniswami kicked up a needless fuss over where Karunanidhi should be buried, it was a tit-for-tat without respect for the dead. Till the Madras High Court permitted it on Wednesday, the government refused to allow Karunanidhi's burial on the Marina Beach close to the grave of his mentor Anna, as the late DMK patriarch CN Annadurai was known.

The AIADMK leaders may have congratulated themselves on striking up an ingenious way to pay the deceased Karunanidhi in his own coin. That's because Karunanidhi had failed to grant the same final resting place to AIADMK leader MG Ramachandran's widow Janaki when she died in 1996. 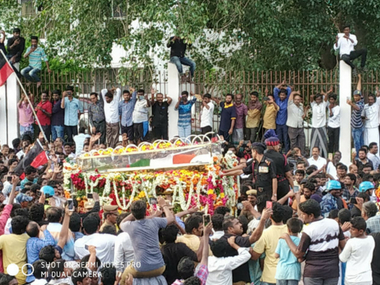 Never mind if Janaki was the chief minister for 23 days and Karunanidhi was in that job for 19 years over five terms. Even eye-for-eye feuds have a gruesome fairness to them: One eye for one eye. The ruckus that the Tamil Nadu government has kicked up has another name. It's called pettiness. And pettiness allows neither hatchets nor dead bodies to be buried in peace. It only buries decency and honour.

It's possible, if not probable, that there is an ideological and political twist to the ghastly episode. Did Palaniswami suffer from hallucinations that, if Karunanidhi was buried there, the DMK would walk away with the legacy of Anna? After all, it is the AIADMK that claims to be his ideological heir, and the second A in the party’s name represents Anna. The AIADMK was an offshoot of the original DMK led by Anna.

Even if this was the case, it in no way reduces the meanness of the petty quarrel over the burial of a 94-year-old, five-term chief minister. The cruel joke is that there is no Anna legacy for anybody to claim in the first place. Watched by millions of people, Anna’s Dravidian legacy was buried along with his body on the Marina, after the tobacco-chewing ideologue died of cancer in 1969.

The original Dravidianism had been fanatically anti-Brahmin, based on the fuzzy, unproven notion that India is divided into a Dravidian south and the Brahminical Aryan race of the north. The demand for an independent Dravidanadu was part of this so-called movement. But by the time Anna had become the first DMK chief minister in 1967, he had toned down the party's anti-Brahmin idiom, reducing it into a somewhat more tolerant ideology aimed at demolishing caste inequality.

Neither Karunanidhi (who belonged to the Isai Vellalar community of temple musicians) nor MGR (a Sri-Lanka-born Malayali who had an upper-caste father and a backward class mother) nor Jayalalithaa (a Brahmin) inherited Anna's Version 2 of Dravidian ideology that sought to fight for the rights of downtrodden castes. For all of them, Dravidian politics came to mean politics of dominant castes.

Anna must be stirring in his grave, with the triumvirate of Karunanidhi, MGR and Jayalalithaa buried close to him. Leave alone trying to fight the caste system, Karunanidhi and MGR used caste to win elections and finish each other off. Later, Jayalalithaa replaced MGR in this game. Legacy of Anna? Forget it.

In the modern form of Dravidianism, decimating the rival with the enthusiasm and dedication of a ninja is important. The means aren't, even if they are petty. If MGR wanted to abolish the state's Legislative Council because Karunanidhi had become its member in 1984, if Karunanidhi allowed his men to pull Jayalalithaa's sari pallu in the Assembly in 1989, which made her call the DMK leader a Duryodhana, if the police under the Jayalalithaa regime roughed up Karunanidhi in the middle of one night in 2001, which made the helpless man cry. "They are killing me, they are killing me", and if Jayalalithaa made a habit of slapping defamation suits on journalists critical of her, these were the manifestations of petty politics cloaked in fake Dravidianiasm.

Even Indira Gandhi, arguably the mother of Machiavellian politics in India, was subtle and even graceful in her machinations against rivals except during the Emergency. But the small-mindedness that Dravidian parties call forth against each other suffer from no sophistication.

The latest instance of this meanness on the part of Palaniswami in trying to deny the Marina burial place to Karunanidhi has serious potential for boomeranging on him. The mess in which the AIADMK continues to find itself following Jayalalithaa’s death in 2016 has already put DMK ahead in the 2019 Lok Sabha election.

The death of Karunanidhi and the shameful kerfuffle over his burial could only push up DMK’s ratings even further. And that can only be bad news for Narendra Modi, because DMK is now part of the Congress bandwagon.