With the proceedings of the Parliament getting turbulent in the Parliament, the government is hard-pressed to push its agenda. The Houses have not been transacting much legislative business amid repeated disruptions and Opposition's demand to debate key issue.

On Thursday, the Lok Sabha was adjourned sine die after repeated disruptions by the Opposition over farm crisis and cow vigilantism. The Rajya Sabha, however, say a heated debate over cow vigilantism. Sparks flew in the Upper House on during the discussion on cow vigilantism and atrocities on Dalits, with the opposition trying to corner the government and a minister raking up the 1984 anti-Sikh riots and the 2002 Godhra incident. 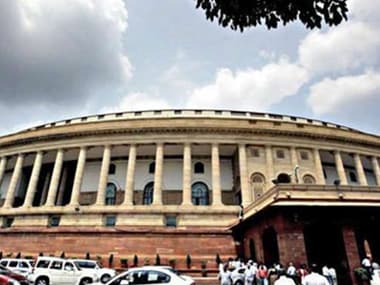 As the opposition accused the government of creating an atmosphere of fear in the country, the government in its reply said there was nothing anti-Muslim or anti-Dalit about the incidents, but cow vigilantism should not be "eulogised".

"It (mob violence) has nothing to do with cow vigilantes ... It has something to do with Narendra Modi. It is the Prime Minister who is creating the kind of environment in which this is happening," Sibal said in a bitter attack on the government.

"It is better for the Prime Minister to come clean over this rather than indulge in doublespeak," he said, adding that those killing innocent people in the name of cows were not "real Hindus".

He also quoted from old speeches of Modi where he spoke of "pink revolution" and called for stopping cow slaughter.

"We need to ask ourselves as to why this is happening now. We have not seen such violence in the last 40-50 years. The cow represents 'ahimsa' (non-violence). When you kill in the name of cow, you kill the cow, you kill ahimsa and you kill humanity," Sibal said.

Union HRD Minister Prakash Javadekar said that mob violence must be condemned but it should not be done "selectively".

"When I condemn mob lynching, I do not suffer from selective amnesia like some of our opposition colleagues," Javadekar said as he mentioned the 1984 anti-Sikh riots and the killing of "karsevaks" in Godhra in Gujarat in 2002.

"In 1984, Sikhs were lynched or burnt alive, at least 3,000 of them. In 2002, Ram 'bhakts' (devotees) returning from Ayodhya were lynched in Godhra. We condemn all such incidents," the HRD Minister said.

A visibly angry Leader of Opposition Ghulam Nabi Azad hit back by saying that notwithstanding who was in power, the "parivaar" (a reference to the Sangh family or Hindutva groups) people were found involved in every communal riot in the country.

Azad retorted: "Let me say that in all the communal riots that occurred in India, people from your 'parivaar' were found involved."

He said it was the Congress that fought for the country's freedom and "not you people" before the opposition members walked out of the House.

Minister of State for Home Affairs Hansraj Ahir said the Modi government was neither anti-Dalit nor anti-Muslim.

In his reply to the discussion, Union Finance Minister Arun Jaitley said the government would show no sympathy to those lynching people in the name of cow protection.

"Nobody has the right to take law in his hands. And if somebody does, he should be condemned, arrested and prosecuted. The government's stand is very clear -- nobody is allowed to do that," Jaitley said in the Rajya Sabha.

"...there is no rationalisation, no argument about hurting of sentiments can be an explanation for the crime," he said, adding that the central government was absolutely committed on the issue and had already sent an advisory to the states.

"The law will certainly take its course in these cases. No amount of sympathy will be shown to these people. The Prime Minister has spoken thrice on the issue," Jaitley said.

On the atrocities on Dalits, Jaitley said oppression in the name of caste would not be tolerated and that stringent laws were in place to protect the Dalits.

"The way we have historically treated one section of our brethren is a black spot in our history. We owe it to ourselves, if not to them, to reverse that process of history," the minister said.

However, the senior Bharatiya Janata Party leader said, it was also not proper to "eulogise" cow slaughter in states where there was no prohibition on cow slaughter.

BSP leader Satish Chandra Mishra said that his party was not satisfied with the minister's reply and staged a walkout.