New Delhi: Hitting out at the Congress-led Opposition for observing a 'Black Day' against demonetisation decision, government on Thursday said they are actually observing a "Black Money Support Day".

Information and Broadcasting Minister Venakaiah Naidu also termed the 'dharna' by opposition leaders near the Gandhi statue in Parliament premises as a big 'tamasha' and an insult to the Father of the Nation. "Our opponents particularly the Congress I am told are observing a Black Day. I say what they are observing is a 'Black Money Support Day'," Naidu said. 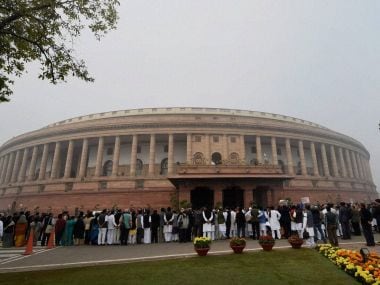 Opposition leaders protest to observe a 'Black Day' against demonetisation at Parliament House in New Delhi on Thursday during the Winter Session.PTI

Attacking the Congress over the protests near the statue of Gandhi, he said the opposition party was actually moving away from the Gandhian spirit. "Dharna by opposition parties near Gandhi statute in Parliament premises is a big 'tamasha' and an insult to the Father of Nation," he said.

"By posing for photos in front of Mahatama Gandhi, you cannot claim to be a Gandhian. And you cannot make the people believe that you are believers of Gandhism. Scuttling the debate on demonetisation for than two weeks and not allowing Parliament, staging dharnas, going to the Well of the House, abusing the Prime Minister, raising slogans is in no way going to help democracy," Naidu said.

He added that such an attitude reflected "weakness" of the opposition and "hatred" towards the people's mandate. "That's why I say they are insulting the Mahatama Gandhi. They are insulting the concept of satyagraha. It is time Congress realises its folly," he said. Not allowing Parliament to function only reflects "contempt" of democracy, he told reporters.

Naidu said that while Gandhi used 'Satyagraha' to ensure victory of truth over evil, Congress was only inflicting "pain" on people. The minister observed that praise has poured in from abroad as well on the demonetisation decision.