The Lok Sabha stands adjourned for the day. And here's an astute observation from Dr Vijay Mallya on the Parliamentary proceedings.

With yet another session of Parliament adjourned amid BJP orchestrated chaos, Congress spokesman Manish Tewari addressing the media insisted that the Prime Minister would not resign, and repeated calls for the opposition to join in a debate.

"Whether coal blocks should be cancelled or not should be decided only after a proper procedure, which requires a debate. Many states told us not to auction coal blocks. What is the truth then? Again we must debate to find all this out", Tewari said.

Responding to allegations made by the Left that the BJP and Congress were jointly collaborating to prevent debate on Coalgate, Tewari said, "There is no question of 'match-fixing' between BJP and Congress. We want to debate, they are avoiding. We just want the Parliament to function. That is our only demand."

It was only a matter of time really. Despite the best efforts of Lok Sabha speaker Miera Kumar and Rajya Sabha deputy Chairman PJ Kurien, both houses of Parliament were adjourned.

Proceedings lasted roughly twelve minutes, which, sad to say, is the longest that it has functioned for a while yet. In the chaos however, the Lok Sabha managed to pass the Chemical Weapons convention amendment bill. Details of it can be found here.

The Lok Sabha was adjourned for the day.

Parliament resumes at 12pm, but the BJP was clearly unfazed by the pleas of the SP, TDP and Left parties. Slogan shouting and chanting continue in both the Rajya Sabha and Lok Sabha. The Lok Sabha speaker Miera Kumar and Deputy chairman of the Rajya Sabha Prof PJ Kurien are ignoring the chanting and keeping both houses functioning, though one feels it is only a matter of time before they bow to the inevitable and adjourn proceedings till 2pm.

11.40am: CPI, CPM, SP and TDP to protest against stalling of Parliament at 10 am tomorrow.

Samajawadi Party Chief Mulayam Singh Yadav, holds a joint Press conference with the Left and TDP, calling for a Supreme Court investigation into the CAG report and coal block allocation, and the proper functioning of Parliament.

He also announced that the CPI, CPM, SP and TDP would protest the stalling of Parliament at 10 am on Friday.

The CPI(M) said meanwhile, that a discussion on coalgate was needed, adding that the disruption of Parliament was a joint ploy on the part of the two main parties as they did not want to discuss the CAG report on coal allocation. "The Congress, BJP does not want to debate on coal scam. This is match fixing!", said Gurudas Dasgupta of the CPI (M).

Times Now reports that the Samajwadi Party chief Mulayam Singh has called for a meeting with the leaders of all other parties to speak on the disruption of Parliament due to the standoff between the Congress and BJP.

According to the channel, the parties will protest against the protests in Parliament which are not allowing Parliamentary debate. A Catch-22 solution?

Both Houses of Parliament continue to witness slogan shouting by BJP MLAs.

In the Rajya Sabha, MoS V Narayanasamy tried to answer a query but discovered that he didn't have a working microphone and tried to shout his reply to a question. He failed.

Within minutes, the House was adjourned by Chairman Hamid Ansari.

In the Lok Sabha, similar scenes were witnessed and Speaker Meira Kumar has also adjourned proceedings.

Both Houses are expected to resume at 12:00 pm.

10: 45 pm: After a break for Onam, Parliament is set to resume today but the BJP seems unlikely to let either of the two houses function, as it continues to seek the resignation of the Prime Minister over the CAG report on the allocation of coal blocks. 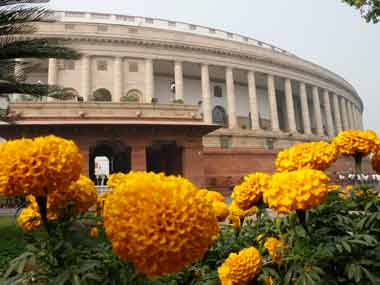 Will Parliament function in this session? Reuters

Prime Minister Manmohan Singh is away in Teheran attending the Non-Aligned Movement, and UPA chairperson Sonia Gandhi had taken the fight to the BJP MPs on Tuesday and could continue to lead her party’s MPs as they attempt to get the BJP to engage in debate over the issue, instead of disrupting Parliament.

In a meeting with Parliamentary members on Tuesday, Gandhi had referred to blackmail being the “bread and butter” of the BJP and had asked her MPs to defend the government’s policies.

However, the BJP has made it clear that it has no plans to relent in its campaign against the Congress and has said it is preparing to launch nation-wide campaigns in order to educate people about the losses to the exchequer due to the coal block allocations.

While other political parties sit on the sidelines hoping that the two parties will resolve their differences and allow the house to function, neither the Congress or the BJP look like they have any plan to back down.